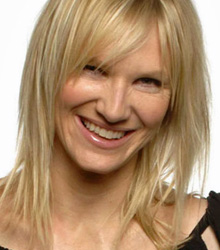 Jo Whiley is one of Britain's most popular and iconic radio DJs. She was the host of the long-running weekday Jo Whiley Show on BBC Radio 1 and currently presents an evening show on Radio 2, Monday to Thursday.

During the final year of Jo’s degree course, still unsure of what she wanted to do, a conversation with a lecturer led to a job with BBC Radio Sussex on a show called Turn It Up. It allowed anyone to get on the radio and required Jo to attend shows and interview the musicians.

Following this foray into the music industry, Jo studied radio journalism in London before securing a presenting role on a youth culture and music show for BBC Radio 4. She then moved into television, firstly at BSB where she produced and presented the indie show, then at Channel 4 where she worked as a researcher on The Word, with her friend Zoe Ball, and giving airtime to Nirvana and Rage Against The Machine.

From 1993-2011, Jo presented Radio 1's Evening Session alongside Steve Lamacq, and from 1995 her own Saturday afternoon show, during the heyday of Britpop with bands such as Blur and Oasis. Then, in 1997, she was given a solo weekday lunchtime show titled The Jo Whiley Show and, later, The Lunchtime Social. Following the Jo Whiley Show, she went on to present a weekend show on Radio 1 between 1pm and 4pm. Her last show on Radio 1 was in 2011, after 17 years with the station.

Between 1995 and 1998, Jo Whiley was a regular guest presenter on Top of the Pops, initially co-presenting with fellow DJ Steve Lamacq before flying solo and alternating with Zoë Ball and Jayne Middlemiss.

In 2011, Jo moved to sister station BBC Radio 2, where she presents an evening show Monday to Thursday.

In addition to her radio and voice over work, Jo Whiley is also an adept television presenter and often fronts televised coverage of major music festivals such as Live8 (2005), the Glastonbury Festival, Sound city Music Festival and other Radio 1 road shows. She also narrated the BBC3 series, Little Angels and provided the radio voice over for Richard Curtis' hit romcom Love Actually (2003).

As one of the UK’s most recognised radio DJs, both visually and from her distinctive voice, Jo Whiley is hugely popular for an array of corporate and private engagements.

Highly experienced and versatile around a client’s needs, for corporate presenting opportunities Jo is the perfect choice as an award ceremony host or compere, and is equally at ease in the interview chair hosting Q&A sessions.

As a DJ, Jo’s 25+ years in the music industry have cemented her as one of the nation’s favourites, making her an ideal and popular at corporate parties and private engagements alike.

Jo Whiley presents a 60-90 minute headline DJ set with either her popular 90s playlist or, depending on the event and audience, a complete cross-section of music from the 70s and 80s through to current chart-topping hits.

The Music Week Awards were a big success and Jo Whiley was a great host keeping the audience engaged and keeping the event running to time!

Clients often ask about purchasing books for giveaways and delegate packs. Below you’ll find a selection of products by Jo Whiley. Click the images to view on Amazon's website. For bulk orders, please speak with your Booking Agent.

How to book Jo Whiley for your event