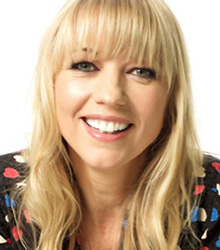 With over two decades on air, Bolton lass Sara Cox hosted The Radio 1 Breakfast Show for 4 years, reaching an audience of 8 million listeners, before moving to Radio 2 where she presented Sounds of the 80's and covered Radio 2 Live in Hyde Park.

In 2019, she began her new 5-7pm show on BBC Radio 2, moving from her nightly show and regular stints covering The Breakfast Show.

The same year, Sara's Sunday Times Best-selling debut book 'Till The Cows Come Home' was published by Hodder & Stoughton. The book is a funny and heart-warming love letter to childhood, family and growing up.

Despite her self-confessed "knock knees", Sara Cox left school with four A-levels for a career in modelling; that's how she was first scouted for television, in 1994 by the producers behind The Girlie Show.

Her broadcasting career started at Radio 1, co-presenting a lunchtime show with Emma B. She went on to launch the Sunday Surgery, where she and the team reeled in a Sony Gold and Sara earned her stripes presenting the breakfast show before doing a stint hosting drive time.

In front of the camera, Sara's television work includes Back in Time for the Corner Shop, dating series Love in the Countryside on BBC2, and Britain's Favourite Dogs for ITV. Her latest show is Between the Covers, which airs on Fridays at 19:30pm on BBC Two. Sara invites guests to share their favourite reads of all time, so viewers finish every week with a long list of good book recommendations.

Sara's hosted The Sara Cox show which aired weekend mornings at 8:30am on ITV. Co-hosted by her dogs Beano and Dolly, Sara's guests included everyone from Michael Sheen and Mark Ronson to Davina McCall and Prue Leith.

With Big Breakfast, Eurovision Song Contest, The Great Pottery Throwdown, Have I Got News For You, and ITV's Big NHS Singalong, Sara has fronted some of the biggest shows in the UK.

She is a regular co-presenter of Radio 4's Loose Ends, and has written columns for the Mirror and Guardian.

An exceptional broadcaster and live presenter, Sara Cox is funny, smart and the best story teller.

How to book Sara Cox for your event