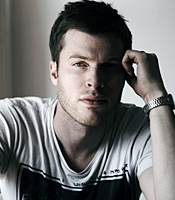 Rick Edwards began his career on the stand up comedy circuit after graduating the University of Cambridge with a degree in Natural Sciences. After graduating, he dabbled in modelling, which he didn’t enjoy as he felt he should have been taken more seriously after the years of studying he had gone through. Rick hosted a Saturday evening radio show on XFM, entitled 'The Weekender' until January 2009.

He actively campaigns for youth engagement in politics and voting and, in Summer 2014, delivered a hugely successful TEDx Houses Of Parliament talk offering some solutions to get more young people to vote. His first book, None Of The Above, was subsequently published in March 2015 by Simon & Schuster. In it he describes the basics of the political process in the UK, gives an overview of the issues facing the country, and explains the power of your vote.

Rick hosts the podcast Science(ish) alongside Dr Michael Brooks which delves into the science behind popular films. The series proved such a hit that the duo were commissioned by Atlantic to write a book of the same name, Science(ish): The Peculiar Science Behind The Movies, which was published in October 2017 and ranked number 1 in the Physics, Cosmology and Humorous Essays Amazon charts for several weeks as well as achieving a position of 21 in the overall book charts. The podcast itself has topped the iTunes Science & Medicine chart.

As a writer, Rick’s original film Burger Van Champion was commissioned as part of C4’s Coming Up strand in 2013 and was described by the Observer as ‘a remarkable debut’ and by Time Out as ‘funny, touching [and] superbly written’.

Rick Edwards contributes regularly to the Evening Standard and Huffington Post. Amongst his other interests are the environment (he is a regular on the Observer Ethical Awards judging panel), backgammon (he recently competed in an international tournament in Copenhagen), football (he is an ever-optimistic Liverpool fan) and cats (he has one called Tippi).

We were delighted to welcome you to HCS last week. Pupils, parents and staff were delighted to meet you and everyone thoroughly enjoyed your Speech Day address. Thank you for sharing this very special occasion with us.

Clients often ask about purchasing books for giveaways and delegate packs. Below you’ll find a selection of products by Rick Edwards. Click the images to view on Amazon's website. For bulk orders, please speak with your Booking Agent.

How to book Rick Edwards for your event