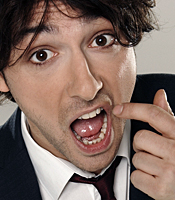 Alex Zane began his stand-up career at the age of 18 when he became a finalist on an open-mic competition called So You Think You're Funny.

He moved to London to concentrate on his career, and before leaving medical school, he presented "The Alex Zane Show" on UCL's student radio station Rare FM. He also presented on Wired FM, which led to his own show on London alternative/Indie station Xfm. Alex' radio show was heard by MTV producers, who subsequently signed him up to present shows such as Screenplay and TRL.

In 2006 Alex Zane was signed by Channel 4 under an exclusive contract. He co-presented Popworld and the accompanying Popworld Radio podcast with Alexa Chung until the programme ended in July 2007. He has narrated an E4 television show, Princess Nikki, and made appearances on Channel 4 entertainment programmes such as The Law of the Playground, 8 out of 10 cats and Balls of Steel. He presented E4's coverage of Channel 4's hoax reality show Space Cadets as well as Death Wish Live, the Digital Music Awards 2005 and Carling Live 24.

From April 2007 to April 2009 he presented the weekday breakfast show on Xfm. In April 2010 Alex jointly presented a Friday evening radio show on NME Radio with the creator of the indie club night Propaganda, DJ Dan.

Alex has also presented television coverage of several large scale music events, including the V Festival, and the Wireless Festival in London's Hyde Park and more recently Orange Unsigned Act. He presented Celebrity Scissorhands first on BBC Three, then on BBC One, as part of the BBC's Children in Need charity campaign in November 2006. He has presented Channel 4's variety show based on YouTube videos, Rude Tube, four times. Alex also co-presented the Kerrang! music awards 2008 with Cristina Scabbia.

Alex had small acting roles in Deuce Bigalow: European Gigolo (2005), Dawn of the Dead (2004), Land of the Dead and The League of Gentlemen's Apocalypse. In July 2009, he co-hosted Harry Potter and the Half Blood Prince: A T4 Special with Rick Edwards and hosted the Channel 4 coverage of Inglourious Basterds. Alex Zane also hosts a film show, Alex Zane's Guest List, on Sky Movies Premiere and is the film reviewer for The Sun newspaper. In 2010 Alex performed at the Edinburgh Festival with his stand-up show 'Just One More Thing...'.

How to book Alex Zane for your event