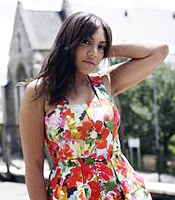 Miquita Oliver began her career co-presenting Popworld with Simon Amstell; a music show which reached iconic status. She is now in her tenth year on our screens. Best known for her work on T4, Miquita is a skilled and respected broadcaster.

Miquita has presented a number of one-off film and music specials and interviewed everyone from Robert DeNiro and Martin Scorsese to Beyonce.

Miquita regularly hosts both Saturday and Sunday mornings on T4. She also fronted her own show, The Month With Miquita on 4music, which proved to be a great opportunity for her to exploit her many skills as a broadcaster.

Miquita is also experienced at hosting from live events Miquita has excelled at events such as V Festival, Bestival and T4 On The Beach. Her keen interest in culture has led her to guest on This Week to discuss dressing for success.

Miquita has a strong radio voice having hosted a weekend morning show on BBC's 1Xtra.

Miquita has applied her skills to hosting a variety of programmes and events, including The Karate Kid premier for ITV2 and hosting the red carpet for the Charlie St Cloud premier

How to book Miquita Oliver for your event