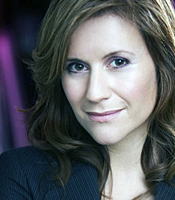 Harriet Scott has been presenting radio shows since the early 1990s. On her own she has presented daily programmes for numerous radio stations before heading up a team to launch Britain’s first ever female headed Breakfast Show in the days before Girl Power!

She was then personally head hunted by Chris Evans to present Virgin Radio's Drive-Time show on her own. Four years later she again teamed up, this time with Jono Coleman to present Heart Breakfast. During this period the show won a Sony Gold Award for Best Entertainment.

Following Jono's departure, Harriet was joined by Jamie Theakston and the show went on to beat Capital Radio in the Breakfast ratings war for the first time in Capitals 17 year history. Harriet is a regular guest on the BBC Breakfast newspaper review slot.

And it doesn't stop there for Harriet. As a sought after voice over artist, she presented LWT's major Sunday night show 'Smash - The Story Of The Great British Hit Single', and is the voice of VH1's 'Fabulous Life Of...'. She is also the voice of Laboratoire Garnier Fructis TV ads.

An ardent writer, Harriet has written for Cosmopolitan magazine and had a weekly column in London magazine Footloose, a guide to what's on in London, for a number of years.

How to book Harriet Scott for your event