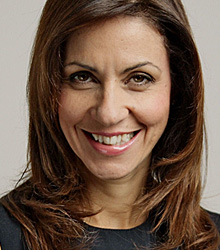 Specialising in documentaries and consumer affairs programmes, Julia Bradbury is one of television’s most popular and versatile presenters.

Best known for presenting BBC1's rural affairs show Countryfile alongside Matt Baker from 2004 until 2014, the show's ratings soared to over 8 million viewers, reporting on rural and environmental issues throughout the UK, and with Julia reporting from across the length and breadth of Britain.

In 2010, Julia and Matt Baker extended their partnership beyond Countryfile and fronted BBC1's Secret Britain, in which the pair explored the hidden corners of the UK in search of the best the countryside has to offer - from deserted beaches to tumbling waterfalls. The show was a huge success, regularly drawing in over 6 million viewers.

Credited with revamping Sunday night primetime television on BBC One'sCountryfile, and dubbed’Lady of the Lakes’following her many walking series, Julia’s six-part series, Britain’s Best Walks, was originally shown on ITV and continues to be repeated, reached an average of over 4 million viewers per programme.

Julia's reputation as the face of the outdoors began when she fronted Wainwright Walks, a stunning BBC Four series shot in the Lake District. The programme saw Julia re-tread the footsteps of legendary fell-walker Alfred Wainwright, and has to date spawned three series. Julia has also filmed two additional sets of hiking exploits, in Germany and South Africa respectively.

In Climb Britain for BBC1, Julia faced her fears and managed to successfully climb to the top of The Old Man of Stoer - a 60 meter high sea stack that surges from the sea alongside the cliffs in Lochinver, Sutherland. Julia had never rock climbed before and regards this as one of her most frightening challenges.

More recently, her ITV seriesJulia Bradbury's Australia, saw Julia travel from the west to east coast, talking to surfers, crocodile wranglers and conservationists, combining her passions for travel and the environment.

Outside her television life and following her dedication to environmental causes, Julia is an ambassador for Keep Britain Tidy, The National Trust and The Scouts as well as Bowel Cancer UK and Prostate Cancer. She is also proud to be the first female President of The Camping and Caravanning Club.Following her involvement with the BBC programmeFamous, Rich and Homeless, she has now become a staunch supporter of the Big Issue and the plight of homelessness.

In addition to travel, Julia is a renown motor head. She has presented Top Gear, Auto Sport and Stars in Fast Cars for BBC One, Superbikes for British Eurosport, Speedway Grand Prix for Channel 4 and The Real Car Show for ITV. Julia also presented Goodwood 76th Members Meeting for ITV and the Goodwood Festival of Speed.

Julia Bradbury’s impressive back catalogue of presenting posts includes a five year stint on consumer affairs pro-gramme Watchdog, a posting to Los Angeles as Hollywood correspondent for GMTV, hosting the launch of Channel 5 in 1997, before going on to present Exclusive! for Five, as well as a decade of travel journalism presenting Wish You Were Here for ITV1 and the Rough Guide series for Channel 5.

Clients often ask about purchasing books for giveaways and delegate packs. Below you’ll find a selection of products by Julia Bradbury. Click the images to view on Amazon's website. For bulk orders, please speak with your Booking Agent.

How to book Julia Bradbury for your event