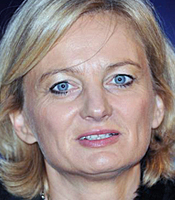 Alice Beer is the sole presenter for the exciting homes show Hot Property for Channel 5 - the second 12 part series is on its way and features first time buyers being given the opportunity to win a house.

Alice Beer is a regular face on the BBC. She hosts the celebrity interviews on The Heaven & Earth Show (BBC1) and often co-presents it. She is currently doing various reports for the popular investigative programme 4x4 (BBC1). She has presented Holiday, Healthcheck and Face Value on BBC1 and was the main presenter for the BBC daytime gardening challenge series, Real Rakeovers.

Alice Beer joined the BBC in 1987. As part of her production training, she took her first placement working on That's Life. She then went on to become a trainee researcher on programmes such as Kilroy and Gloria Live. Alice was still a researcher when she joined BBC1's consumer programme Watchdog, steadily rising up the ranks to become an assistant producer and then presenter/reporter.

The past series of Watchdog have involved Alice in various undercover investigations, including a stint of selling fire extinguishers door to door, and an incident investigating telesales in Las Vegas which led her a bit too close for comfort to the Mafia!

In 1994 Alice did a series of reports for the BBC Summer Holiday programme.

In Spring of 1995 and 1996 Alice Beer co-presented Healthcheck for the BBC with Judith Hann. The series exposed scandals, challenged assumptions and investigated the good and the bad with the same style and force as Watchdog. For the third series in Spring 1997, Alice became the main presenter.

She has also presented a series of programmes for Radio Five Live, called "The 21st Century and How to Survive It." She was a co-host on the LBC Breakfast Show with Simon Bates and now has her own lunchtime consumer show on BBC London Live.

In December 1999 Alice presented a Holiday programme special 'Fasten Your Seatbelts' in Disney World, Florida and passed the strenuous tests to become a member of the Disney team!

In the spring of 1999 Alice Beer presented 'Families At War' a popular BBC1 light entertainment series with Vic Reeves and Bob Mortimer.

She has also hosted 'Show me the Money', Channel 4's daytime financial show and also the BBC's 'Boat Show'.

How to book Alice Beer for your event