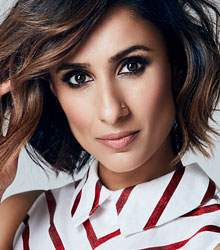 An RTS Award-winning broadcaster and a career spanning 20 years, with her infectious enthusiasm, passion and wide-ranging interests, Anita Rani is a hugely popular television presenter and live events host.

As one of the main presenters on BBC One's Countryfile, Anita has become a familiar face on British television whilst also presenting a range of explorative documentaries for the BBC including Bollywood: The World's Biggest Film Industry; My Family, Partition and Me: India 1947 and most recently, War On Plastic with Hugh and Anita alongside Hugh Fearnley-Whittingstall.

Anita is also The One Show's Current Affairs correspondent, tackling the latest issues affecting the nation- whether that is encountering victims of forced marriages or investigating the difficulties facing the over 65's in the workplace.

She has also reported on heartless online dating scams, uncovered landlords who were cramming desperate tenants into cramped and dangerous properties, helped rally a mass street clean up, and reported live from Liverpool where giant marionettes were roaming the city as part of the city's Titanic centenary events. Wherever the show takes her, Anita confronts the subjects head on giving us a real insight into the way our society works.

Anita also delved into her family tree for the BBC's Who Do You Think You Are? In an episode that resonated widely, Anita travelled from Bradford to the Punjab, and was visibly moved by the discoveries she made about her grandparents, and the bigger story it told for many other families.

Other television presenting credits include co-presenting The World's Busiest Railway Station for BBC Two, Escape To the Continent, as well as four series of the RTS award-winning Four Rooms on Channel 4 — where members of the public with antiques, collectables and works of art attempt to negotiate the best price with a team of professional dealers.

Anita's latest TV projects have included presenting Channel 4's Britain's Best Parent?, appearing on fan-favourite Celebrity Gogglebox alongside her Father and presenting Beneath The Crown, a YouTube series for Netflix described as the ultimate viewing companion to the latest series of the hit show, The Crown.

Born and brought up in Bradford, West Yorkshire, to a Hindu father and a Sikh mother, Anita developed an early interest in journalism, hosting her own radio show on Sunrise Radio at the age of 14 and has continued to develop her relationship with radio ever since, joining the BBC's Asian Network in 2005, covering numerous slots for BBC Radio 2 and most recently being announced as the new host of BBC Radio 4's Woman's Hour alongside Emma Barnett.

Also in 2005, Anita became a regular reporter on The Cricket Show on Channel 4. From 20 May 2006 she was a co-presenter of Desi DNA, an arts programme on BBC Two catering to the Desi (British Asian) community. She launched Destination Three, a late night entertainment zone on BBC Three. In May 2006, she joined Sky Sports where she became co-presenter with Simon Thomas on the Cricket AM show each Saturday morning.

Awards & Achievements
In 2018, Anita Rani was honoured with Outstanding Achievement in Television at The Asian Awards. She also serves as an ambassador for The Scout Association in the UK and in March 2021, it was announced that she had been made an United Nations High Commissioner for Refugees Goodwill Ambassador. In 2021, she published her memoir, The Right Sort of Girl.

It seeks to raise the profile of British South Asian heritage and history in the UK through education, arts, culture and commemoration, with the goal of helping people to better understand the diversity of present-day Britain and improve social cohesion across the country.

A consummate professional, she has hosted a plethora of corporate and live events including the Olivier Awards Red Carpet 2017 & 18’ - providing live backstage coverage and interviewing the likes of Tim Minchin, Glenda Jackson and the cast of Hamilton amongst other stars.

She recently joined partnership with luxury travel brand Kuoni, hosting various events around the country throughout the year.

Everyone, without exception has commented on what a great job Anita did, what a pro and held everything together and made the event a success, she is a remarkable performer and has a great screen presence.

Clients often ask about purchasing books for giveaways and delegate packs. Below you’ll find a selection of products by Anita Rani. Click the images to view on Amazon's website. For bulk orders, please speak with your Booking Agent.

How to book Anita Rani for your event