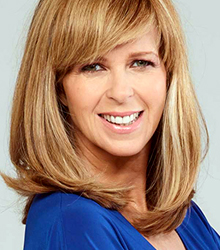 Kate Garraway is a highly respected television and radio presenter, and can currently be seen throughout the week on ITV's Good Morning Britain. She has her own midmorning radio show on Global's Smooth FM from 10am-1pm, with 2.3 million listeners tuning in to her show each week and previously was one of the faces of the National Lottery, presenting live on Saturday nights on BBC1.

Prior to that, Kate hosted Good Morning Britain's predecessor show Daybreak and was also a regular co-presenter on the earlier programme GMTV between 2000 and 2010. Having presented on GMTV & Daybreak for over a decade, in her previous role as Entertainment Editor for Daybreak, Kate Garraway has interviewed some of the biggest names in the world of entertainment, including Tom Cruise, Johnny Depp, Justin Timberlake, Nicole Kidman and Julia Roberts.

Kate began working in television in 1994, when she joined the south edition of ITV News Central as a production journalist, reporter and news presenter. She worked in BBC radio and with ITV news and presented Meridian Tonight, before being picked as one of the team of presenters to launch BBC's 24-hour rolling news channel, News 24, in 1997.

She joined Sky News in 1998 as a main anchor on its breakfast show, Sunrise.

In addition to her work on GMTV, Daybreak & GMB, Kate has been involved in a wide range of network programmes including BBC1's Strictly Come Dancing fifth series, which saw Kate partnered with professional dancer, Anton Du Beke. She remained in the show for several weeks before leaving in week 7 after struggling through an injury she received during rehearsals. She came fourth in 2019’s I’m a Celebrity ... Get Me Out of Here!

It was a real pleasure working with Kate Garraway, she was extremely professional and flexible. She has a very warm personality which came across really well and helped to engage the audience with the onstage content. Despite a very complicated and full on schedule Kate remained calm and professional throughout and nothing was too much trouble.

Clients often ask about purchasing books for giveaways and delegate packs. Below you’ll find a selection of products by Kate Garraway MBE. Click the images to view on Amazon's website. For bulk orders, please speak with your Booking Agent.

How to book Kate Garraway MBE for your event