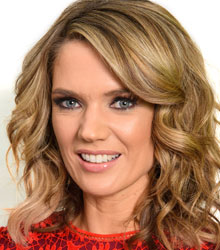 Charlotte Hawkins is an experienced TV presenter who currently anchors on ITV’s breakfast show Good Morning Britain, which she joined upon its
launch.

Before joining ITV, Charlotte worked at Sky News for seven years presenting on Sunrise with Eamonn Holmes. She also hosted her own daily news show from 9-10am. During that time she covered many breaking news stories and interviewed many high profile politicians, including George Osborne, Ed Miliband, Nick Clegg, William Hague and Ed Balls.

Her interview with the Defence Secretary Philip Hammond during the floods crisis was picked up by other media outlets and made national news. Charlotte anchored Sunrise live during the Olympics, presented live on location for the Diamond Jubilee and Royal Wedding, and was also live on location for Sky News' General Election coverage.

Charlotte began her broadcasting career working at ITV Meridian as a producer and reporter, before co-presenting the main regional news show for four years. During that time she also co-hosted the current affairs discussion series The Big Story, as well as presenting the London Boat Show and Southampton Boat Show programmes for ITV1.

Charlotte writes travel articles that have been published in The Mail on Sunday, The Daily Telegraph and The Independent newspapers.

An experienced award ceremony and corporate host, Charlotte Hawkins has presented many events including the Investor Allstars Awards at the Natural History Museum, the Cleantech Connect Awards for 3 years successively, the Manufacturing Industry Awards, the Learning & Skills Council Awards, the Ward & Partners Children's Awards for 8 years successively, the Adult Learners' Awards for 6 years, and an outdoor Family Prom Classical Concert at Leeds Castle.

How to book Charlotte Hawkins for your event