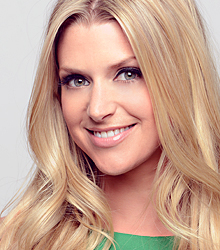 Counselor, life coach and Master NLP practitioner, Anna Williamson is the host of talkRADIO’s Saturday night show, ‘Later With Anna Williamson.’ As an experienced broadcaster, Anna uses these skills as an agony aunt and psychology expert for This Morning, Good Morning Britain and Channel 5’s Big Brother’s Bit on the Side. She is also the host for the National Lottery Xtra and her first book ‘Breaking Mad,’ an anxiety busting guidebook.

Anna has been performing since her early teens and at 15 years of age she joined the girl-group Blush. After a year and a half performing with the group, an opportunity to present on kids TV changed her career path forever. She began reporting for Carlton Television, and was offered a role on the Disney Channel to present Studio Disney weekdays, as well as the Disney Channel Kids Awards in front of 10,000 people.

After a year at Disney, Anna was snapped up by TransWorld International (TWI) to host a daily live technology show, Gamer, where she hosted over 200 live shows. Other credits include, The Tech Guide for G-Cap Media, Channel 5’s Milkshake, The Core and Shake and co-hosting the Channel 5 Summer Road shows and Robot Wars. For ITV; Rescue Robots, Scary Sleepover, Skillicious and CiTV and she has also fronted various shows in the USA, the most memorable for At It Productions on the hit movie starring Amy Adams, Enchanted.

Anna then went on to join GMTV where she co-presented alongside Jamie Rickers the number 1 rating kids show, Toonattik. After 6 years on the successful show, Anna was snapped up by Nickelodeon to host ‘Jamie and Anna’s U Pick Summer’.

Together, they have completed over seven separate series for Nickelodeon, and then went on to complete their second season of hit series, ‘Camp Orange’ and also toured their adventure game show ‘Boys v Girls – The Ultimate Challenge’ to great success.

In 2014, moving away from children’s television Anna went on to take part in ITV’s celebrity diving show Splash! Where she swan dived her way through to the semi-finals and became the last female standing in the competition. Anna also became a regular on ITV's Good Morning Britain and Lorraine, where she covered everything from celebrity interviews to current affairs and weekly competitions.

Due to her natural interest, tenacity and passion to bring the latest showbiz news to the masses, she is considered a highly credible source within the industry and her entertainment column in Digital Spy regularly gets over 100,000 hits.

Unfortunately outside of Anna’s TV success and behind closed doors, she suffered from an almost crippling battle with anxiety disorder. On speaking out about her experiences she realised there was a huge stigma attached to mental health issues and to help fight and remove these stigmas Anna joined MIND as an official ambassador for the mental health charity.

Anna felt it was important to help others battle anxiety and depression and since 2009 studied, and qualified, as a counsellor, life coach and NLP practitioner. Her personal experience, expertise and caring nature have led to her own agony aunt column for teen magazine, Girl Talk and several weekly strands called ‘#Ask Anna’ on ITV daytime show This Morning.

Due to the features great success, Anna has been invited back as a regular to join the team on This Morning covering issues from mental health, family relationships, and parenting.

Anna maintained her energy and positive attitude throughout a long day of filming and our whole crew on site found her a pleasure to work with. She totally understood the messages we were trying to deliver and worked well with the kids on the shoot – a consummate professional whom we would not hesitate to recommend (and have done so to our other clients since!)

Her incredible can-do attitude makes her a total joy to work with.

Anna Williamson has successfully hosted the Land Securities' Community Employment Awards for several years. She is always very professional but also brings fun and laughter to the awards as we celebrate those individuals who have overcome significant barriers to complete training and sustain employment.. Anna is engaging, emotive and witty and we love working with her year on year.

Clients often ask about purchasing books for giveaways and delegate packs. Below you’ll find a selection of products by Anna Williamson. Click the images to view on Amazon's website. For bulk orders, please speak with your Booking Agent.

How to book Anna Williamson for your event