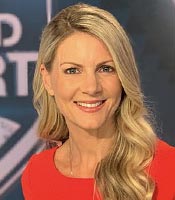 Rhiannon Jones is a multilingual television presenter, reporter and event host. She has been broadcasting in Europe for the past ten years covering news and a wide spectrum of sport. First for the BBC, Sky World News and ITN in London, and more recently covering football and basketball in Spain for Real Madrid Television and as Spain Correspondent for China's CCTV.

Rhiannon recently returned to London to pursue new opportunities, joining CNN as a freelance anchor and reporter for the world sports bulletins, whilst continuing to travel around Europe covering the Champions League and the Bundesliga for Fox Sports. As a trained BJTC accredited broadcast journalist, Rhiannon produces, scripts and edits most of her work.

A well-established event host and ambassador for brands that include Tag Heuer, Emirates, Google, Microsoft and Samsung, Rhiannon has worked alongside sports personalities such as Cristiano Ronaldo, Gareth Bale and Jenson Button. She also hosted the official launch of Luis Figo's manifesto to become FIFA president and more recently Player Contracts 2015, both at Wembley stadium.

A keen sportswoman herself, Rhiannon enjoys her all-round fitness and often competes in 10k races and half marathons.

How to book Rhiannon Jones for your event