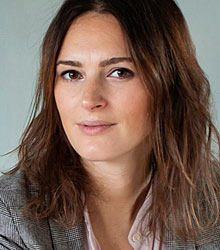 Elizabeth Day is an award-winning journalist, author and broadcaster. She is the author of How To Fail: Everything I’ve Ever Learned From Things Going Wrong and hosts the How To Fail podcast.

Having grown up in Northern Ireland, her first job at the age of 12 was writing for The Derry Journal. She won a British Press Awardin 2004 for Young Journalist of the Year and was Highly Commended as Feature Writer of the Year in 2013. She went on to work for the Evening Standard and then as a news reporter for The Sunday Telegraph.

Elizabeth later co-founded Pin Drop Studio, a live performance short story studio, bringing together a variety of people from the arts through creative writing. It released A Short Affair - its own anthology of original writing from a number of bestselling authors.

The author of several novels, including Scissors, Paper, Stone and Paradise City, Elizabeth wrote the Sunday Times bestseller How To Fail - a memoir based on the podcast that celebrates getting things wrong. On the podcast, she interviews a different luminary or artist each week, exploring what their failures and struggles taught them and how they can be turned into successes.

Elizabeth Day is a regular contributor to Radio 4 and Sky News and has appeared across global media. She is also a columnist for the Mail on Sunday and writes features for numerous publications including The Telegraph, The Times, The Guardian, New York Magazine, The Observer, Vogue, Grazie and Elle. She is also a contributing editor for Harper’s Bazaar.

An adept and sought-after public speaker, Elizabeth Day has delivered talks and workshops to numerous organisations including Facebook, Clearscore and the Guardian Masterclass series.

Keynote Speech - Accepting Failure And Learning How To Succeed Better
In her keynote speeches, Elizabeth discusses failure and accepting it as a way to learn how to succeed better. She contemplates the importance of perseverance in the face of disappointment and how it is our reaction to defeat and disorder that defines us.

She conveys how we learn more when we are at our most vulnerable points in life, and subsequently should learn to embrace the unstructured and impermanent nature of existence.

In a typical keynote presentation, Elizabeth will cover the following topics:
1. Understanding the things you can and cannot control.
2. The idea of 'committed acceptance': accepting your situation and within it, working out what you can commit to in order to make it better.
3. The uses of constructive pessimism: if you face your worst fears, they have less power to harm you.
4. Practical methods to build up resilience and finding opportunities in failure.

And on a broader level, she discusses The Seven Principles of Failure:
1. Failure just is - it exists as a fact, but you are in control of the emotional response you attach to it.
2. You are not your worst thoughts.
3. Almost everyone feels they've failed at their 20s. (Life is not a race; every decade brings with it something new).
4. Break ups are not a tragedy.
5. Failure is data acquisition.
6. There is no such thing as a future 'you'.
7. It is through being open about our own vulnerabilities that we forge the strongest connections.

The event was wonderful with the conversation flowing so easily between Elizabeth and Dolly, I could have listened to them all evening. Elizabeth asked brilliant, emotionally intelligent questions, listening and responding so well to ensure the conversation struck the right balance.

On behalf of the Blackstone Women’s Initiative, we sincerely thank you for the meaningful discussion on Friday. We received an outpouring of positive feedback from participants following the event and wanted to share a few of the comments with you: “It was raw and honest and listening to her perspective and learning her story was extremely impactful”, “It was by far one of the most down to earth and real conversations I’ve had the pleasure of dialing in for since joining BX in 2014 and I thoroughly enjoyed the conversation!”, “She is so intelligent, open and engaging. I found her truly inspirational”, “I think this was one of my favourite to date and couldn’t have come at a better time!”

Clients often ask about purchasing books for giveaways and delegate packs. Below you’ll find a selection of products by Elizabeth Day. Click the images to view on Amazon's website. For bulk orders, please speak with your Booking Agent.

How to book Elizabeth Day for your event