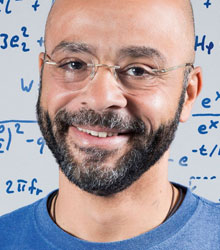 A remarkable thinker with a background as an Engineer, paired with an MBA from Maastricht School of Management in the Netherlands, Mo has an impressive combined career of 27 years, starting at IBM Egypt as a Systems Engineer before moving to a sales role in the government sector

Venturing in to the UAE, Mo joined NCR Abu Dhabi to cover the non-finance sector. He then became acquainted with the consumer goods industry as Regional Manager of BAT. At Microsoft he assumed various roles over a span of seven and a half years, in his last role at Microsoft he headed the Communications Sector across Emerging Markets worldwide.

Mo joined Google in 2007 to kick-start its business in Emerging Markets. He is fascinated by the role that technology plays in empowering people in emerging communities and has dedicated years of his career towards that passion. Over a period of 6 years, Mo started almost half of Google’s operations worldwide.

In 2013, he moved to Google’s infamous innovation arm, Google [X] where he led the business strategy, planning, sales, business development and partnerships. [X] does not attempt to achieve incremental improvements in the way the world works, but instead, it tries to develop new technologies that will reinvent the way things are and deliver a radical, ten fold—10X—improvement.

This philosophy leads to seemingly SciFi ideas such as: Project Loon, which aims to use high-altitude balloons to provide affordable internet access to the 5 billion people on every square inch of our planet, Project Makani, aiming to revolutionise wind energy generation using autonomous carbon fibre kites as well as self-driving cars, Google Life Sciences, and many more.

The business team, under Mo’s leadership, has designed innovative business models analogous to the disruptive technologies [X] creates, and has created deep partnerships and global deals that enabled [X] to thrive and build products fit for the real world.

Alongside his Google career, Mo remained a serial entrepreneur who has co-founded more than 20 businesses in fields such as health and fitness, food and beverage and real estate. He served as a board member in several technology, health and fitness and consumer goods companies as well as several government technology and innovation boards in the Middle East and Eastern Europe. He mentors tens of start-ups at any point in time.

However, despite his high-powered and rewarding job at Google, a wife and two children he adored, fast cars and considerable wealth, Mo Gawdat was unhappy. In fact, he was clinically depressed. As an engineer, he set out to fix the problem by examining provable facts and applying logic. He read extensively about the subject, finding out what worked, and developing an algorithm to ensure the happiness — or at least the avoidance of unnecessary suffering — of himself and others.

Sadly, Mo’s theory was put to the ultimate test when, in 2014, his 21-year-old son Ali, a supremely happy and enlightened young man who brought warmth to everyone he met, died suddenly during a (botched) routine surgical operation for appendectomy.

Mo turned to the ‘happiness equation’ they had developed together, to try to come to terms with his tragic loss and regain his happiness, despite the tragedy that life had sent his way.

As a legacy to his son he wrote his findings in his book, Solve for Happy, published in 2017 and since translated into 28 languages, it reveals his scientific and engineering approach to happiness and is the first step in Mo’s personal mission to make one billion people happy.

Mo left Google X in February 2018 to dedicate the rest of his life to #onebillionhappy.

He speaks Arabic, English, German as well as some Turkish and Russian.

Mo's story, and his commitment to helping people find happiness through everyday practical tools, have inspired and moved audiences worldwide. As well as delivering his message in speeches, Mo can also work with smaller groups in a workshop/seminar context.

His priority when delivering talks is, unsurprisingly, to ensure everyone leaves happy!

Keynote #1 - Finding Silver Linings In The Face of Crisis
We all want to be happy, but life can be hard. What can we do to stay positive and find hope even in the face of loss and adversity?

During this unique motivational keynote, Mo will reflect on the challenges facing our world and share his secrets for finding silver linings even in a crisis. Mo has discovered that happiness follows a predictable equation and has distilled this into practical actions which are relevant to all of us.

Keynote #2 - Solve For Happy
In this seminal motivational talk, Mo Gawdat aims to offer an Engineering approach to happiness based on his International bestselling book, Solve for Happy.

The talk discusses the biggest myth we believe about happiness in the modern world and how to overcome the reasons for unhappiness. It offers a solid model to work with, the 6-7-5 model, and takes the audience through practical actions they can take then and there to start their journey on a path to uninterrupted happiness.

At the end of the keynote, attendees are left with a much clearer understanding of the steps they need to take in order to find happiness even in the harshest of circumstances; and with a clear call to action to invest in their own happiness and the happiness of those they love.

Keynote #3 - Solve For Happy At Work
In this motivational keynote, Mo Gawdat offers solid research on how happiness affects productivity and performance at work, the difference between employee happiness vs. satisfaction, and how managers and HR managers can build an environment that promotes employee happiness based on his international bestseller - Solve for Happy - and his 11 years of experience as a Google executive.

At the end of the talk, the attendees will be left with a much clearer understanding of the value employee happiness brings to company performance and the clear steps to take in order to create a work environment that promotes happiness.

Keynote #4 - One Billion Happy: The Future of Technology, AI & Robotics
In his One Billion Happy talk, Mo Gawdat openly discusses – through the lens of a former executive at Google [X] - the current rate of advancement of technology and the expected technological innovation that will follow in the next 10 to 20 years. The talk will openly address the ethical question this impending science fiction-like reality will bring. Mo uses the insight gained from his nearly 30-year career across the world's major tech companies to offer unexpected yet agreeable solutions to ensure the continued success (and survival) of humanity in this brand-new world.

At the end of this high impact keynote presentation the audience will be given a unique, accurate insider's view of the incredible wave approaching so they may clearly understand the role each of us has to play to ensure our success as it materialises.

Keynote #5 - The Illusion of Control (Solve for Happy)
Control is a pervasive modern day illusion. Among professionals, it leads to work related stress that blurs our judgment and leads to wrong decision-making in the work environment. It also goes home with us to cause suffering and unhappiness.

Mo is a former control freak who learned the hard way the truth about control. In this talk, Mo uses a variety of methods - from a scientific mathematical approach to ancient philosophy – to bust the myths surrounding our concept of control. He clarifies the downsides of our constant attempts to achieve such an elusive target and lays out simple rules to help audiences progress further in life and at work through calculated prioritisation, attention allocation, and committed acceptance.

Keynote #6 - Innovation at Scale: The Principles of Moonshot Thinking
In this keynote speech aimed at decision makers, innovators and policy makers, Mo Gawdat openly shares the secrets of Google's innovation factory, [X], through a look at what worked and changed the world and what needed improvement. With a critical insider's eye, he shares a systematic approach to building an innovation factory that can transcend the restrictive guidelines of any organisation.

By the end of this talk, Mo leaves the audience with an understanding that the difference between the most and the least innovative organisations is a matter of commitment, mindset, and process. He clarifies, at a top level, the details of these differences and leaves the audience with the confidence that they too can foster an environment of innovation, along with a call to action to make it happen.

Mo accepts only a handful of requests for this talk each year, which he gives exclusively behind closed doors for select groups of executives. His insights have been instrumental in affecting directional change for several major organisations and visionary governments since 2017.

A powerful personal story woven with a rich analysis of what we all seek in a way we can act upon.

Clients often ask about purchasing books for giveaways and delegate packs. Below you’ll find a selection of products by Mo Gawdat. Click the images to view on Amazon's website. For bulk orders, please speak with your Booking Agent.

How to book Mo Gawdat for your event