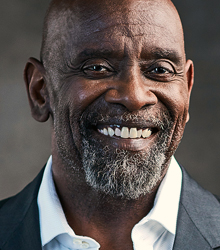 Chris Gardner is the author of the autobiography, The Pursuit of Happyness, a New York Times and Washington Post #1 best-seller that has been translated into fourteen languages. His book was also the inspiration for the acclaimed movie The Pursuit of Happyness for which Will Smith, starring as Gardner, received Golden Globe, Screen Actors Guild and Academy Award nominations for his performance.

Always hard working and tenacious, a series of adverse circumstances in the early 1980's left Chris Gardner homeless in San Francisco and the sole guardian of his toddler son. Unwilling to give up Chris Jr. or his dreams of success, Gardner climbed the financial industry ladder from the very bottom.

He worked at Dean Witter Reynolds and Bear Stearns & Co before founding the brokerage firm Gardner Rich in Chicago in 1987. The company now has offices in New York, Chicago, and San Francisco.

Conquering grave challenges to become a successful entrepreneur, Chris Gardner is an avid motivational and inspirational speaker, addressing the keys to overcoming obstacles and breaking cycles. Chris' aim, through his speaking engagements and media projects, is to help others achieve their full potential.

He is a passionate philanthropist committed to organisations combating violence against women, homelessness, financial illiteracy, and vision diseases; issues of the utmost importance to Gardner.

Motivational Speaking - Spiritual Genetics & The Universal Dream
In his highly acclaimed and sought-after motivational speeches, Chris Gardner shares some of the steps that he had to take and obstacles he overcame in order to get from where he was to creating the life that he wanted to live right now.

Chris also explains the concept of the Universal Dream, an idea that he learned from his mother, who said to him, “Son, you can do or be anything you want to do or be.” Those words would be the driving force that would take him from being homeless with a baby to having his own successful stock brokerage firm.

The Universal Dream also refers to the fact that where you are in your spirit is more important than where you are on the PLANET! The most important experiences in our lives feel the same whether you live in the USA or the UAE! Such as the birth of a child, a graduation, a wedding, a new job or the loss of a loved one. Those are all universal experiences that create a family called humanity.

In his speech, Chris Gardner identifies the importance of the “P’s” in our life: Keeping a Promise. He will share his promise, a promise he made to himself as a 5 year old boy; that when he grew up, become a man and have children, his children would know who their father would be.

And second, that he was going to become world class at what ever he did in his life. Passion. What is that thing that turns you on so much that the sun can’t come up soon enough in the morning because you want to go do your thing?

And, finally, having a Plan. He explains how the plan has to have, what Chris calls, the C-5 Complex (Clear, Concise, Compelling, Consistent and Committed to the plan).

He will also talk about Empowerment, the idea of “I drove here” which means if “I drove here” then “I can drive out of here”. You can’t change something until you own it.

Thank YOU for making it awesome...you are spectacular.  You made our theme come to life, thanks for your inspiration.

Chris Gardner is a truly gifted speaker, teacher and life visionary. I have heard Chris speak many times and each opportunity has left me mesmerised by the power of his observations, his wisdom, and his humanity.

Clients often ask about purchasing books for giveaways and delegate packs. Below you’ll find a selection of products by Chris Gardner. Click the images to view on Amazon's website. For bulk orders, please speak with your Booking Agent.

How to book Chris Gardner for your event