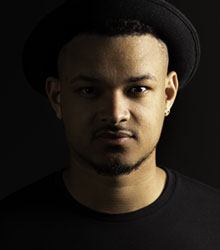 Steven Bartlett is the founder and former CEO of social media marketing agency Social Chain. From a bedroom in Manchester, he built what would become one of the world’s most influential social media companies when he was just 21 years old, before taking his company public at 27 years old.

He is a keynote speaker, investor, author, content creator and the host of one of Europe’s biggest podcasts, ‘The Diary of a CEO’. In 2021 Steven released his debut book Happy Sexy Millionaire, which was a Sunday Times bestseller.

As an 18-year old, black, broke, lonely, insecure, university dropout, from a bankrupt family Steven wrote in his diary that he wanted to be a ‘Happy Sexy Millionaire’ by the age of 25.

After dropping out of university at 18 – defying both his parents and convention in the process – Steve began his first company, a student platform called Wallpark. During this initial venture, where the conventional path would be to market traditionally to students, Steve sought to instead utilise social media.

Building out the UK’s largest online social communities led to a new idea of how brands could capture the attention of young people, and so the idea for his next company was born. Steve rounded up the most talented people in social media, resulting in the convergence of a host of renowned online communities with huge followings.

Steve quickly became fascinated by disruption, in particular how best to disrupt traditional marketing methods. Just like he had done at both school and University, he quit Wallpark. Where people often fear risk, Steve saw an opportunity following the decline of his first company.

With a new focus, Steve began to harness this online influence channelling his efforts into creating the most innovative social media marketing agency of the decade, Social Chain. Steven led a global team of 700+ innovators who have spent years keeping brands at the forefront of what is possible. Social Chain’s impressive client list includes the likes of Apple, Amazon, Coca-Cola, Superdry and Nokia, with their presence now felt in Manchester, London, Berlin, Munich, New York and Bangkok.

He received the Lloyds TSB young entrepreneur of the year award in 2013 for his success in creating a web based platform aimed at students. By 25 he was a multimillionaire, having created a business worth over $300m dollars. But ironically, in achieving everything he set out to, Steven Bartlett learnt that he was wrong about almost everything...

The world had lied to him. It lied to him about how you attain fulfilment, love and success, why those things matter and what those words actually mean. We are losing ourselves. We’re chasing the wrong things, asking the wrong questions, and polluting our minds. It’s time to stop, it’s time to resist and it’s time to rethink the fundamental social blueprint that our lives are built upon.

In Steven’s book he dismantles the most popular, unaddressed lies about happiness that we’ve been led to believe and exposes the source of these lies, examines the incentives that fuel them and replaces them with a practical set of scientifically proven and unconventional ideas that will help you to live a truly fulfilled life, a life full of the love you seek and the success you deserve.

Steven Bartlett is particularly focused on inspiring a new generation of entrepreneurs and creators from a BAME background.

He has invested in and joined the board of Huel, which is the UK’s fastest growing e-commerce company internationally. He’s also invested in, and taken a role as an advisor in Atai life sciences - a biotech company working to cure mental health disorders. Other investments focus on blockchain technologies, biotech, space, Web 3 and social media.

He is widely considered one of Europe’s most talented and accomplished young entrepreneurs and philosophical thinkers.

His podcast, The Diary of a CEO, is an unfiltered journey into the remarkable stories of the people that have defined culture, achieved greatness and created stories worth studying.

Steven sits down with some of the world's most influential people, experts and thinkers and embarks on a curiosity driven journey to discover untold truths, unlearned lessons and important insights that will make his, and the audiences lives more enjoyable, more successful and more fulfilled.

The Diary of a CEO is different because of how raw, honest and emotional it is -living up to the word "Diary" in its name - these are the things people don't usually share, told with a level of honesty that most "interviews" don't give you.

In 2022, Steven Bartlett joined popular BBC2 entrepreneurial show Dragon’s Den, as the youngest ever Dragon in the Show’s history at just 28 years old.

He doesn’t do things by the book. In business, Steven ignores the rules and follows his instincts. He aims to inspire generations new and old by helping them overcome their fear around achieving big.

His inspiring and thought-provoking talks range from motivational to business and technology focused, with audiences ranging from intimate 15 people gatherings round a boardroom table to huge auditoriums with over 15,000 attendees.

As an established and recognised entrepreneur, speaker and investor who has amassed a huge following online, whilst many similar entrepreneurs have distanced themselves from society as their growth increases, Steven has adopted the opposite approach by making it a responsibility of his to connect with his generation.

Steven’s ability to relate to a younger audience is paramount to his success today. Although a CEO and global speaker, he places great importance in his ability to be able to communicate directly with his followers.

An important aspect for Steven’s mentoring activities is his commitment to being a role model for young black men, mentoring a small number of young black entrepreneurs. In association with Facebook, Steven was voted “Black Business Person of the Year” by the British Black Business Awards.

Clients often ask about purchasing books for giveaways and delegate packs. Below you’ll find a selection of products by Steven Bartlett. Click the images to view on Amazon's website. For bulk orders, please speak with your Booking Agent.

How to book Steven Bartlett for your event