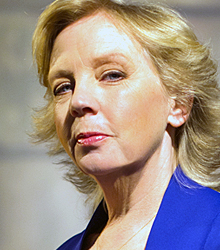 Deborah Meaden is best-known as the feisty no-nonsense investor on BBC2's hit business show Dragon's Den. She joined the panel of investors for series three of the programme and has since invested in a number of businesses; as of 2021, she has made investments in 63 businesses to a value of over £3.3 million.

From a very early age Deborah knew she wanted her own business. Having left school after O-Levels she studied at business college and following graduation worked as a sales room model in a fashion house for three months before moving to Italy.

At the age of 19, with very little capital she launched her own glass and ceramics import company supplying upmarket stores like Harvey Nichols. But despite having sole agency rights, the goods started appearing in other high street shops and, without the finances for a legal fight, Deborah walked away and took on a franchise for Italian footwear and clothing company Stefanel, one of the first in the UK.

Setting up the Stefanel franchise in partnership with a friend was a fantastic experience which taught Deborah Meaden a great deal about retail and franchising, but in the end it wasn't enough. Ultimately she became dissatisfied with the franchise model and sold her share of the business to her partner. After this Deborah embarked on a number of other business ventures including running a prize bingo concession a Butlins, which she feels she learnt the most from.

With several successful businesses in the leisure and retail sector under her belt, Deborah Meaden decided to join the family amusement arcade business. Starting on the shop floor she worked her way up to Operations Director before moving across into the holiday park side of the business, Weststar Holidays.

Within two years she had been promoted to Managing Director and grew the company from one to five holiday parks, providing high-quality family holidays for over 150,000 people per year.

In 1999 Deborah undertook a management buyout borrowing the necessary funds from Lloyds to take over the business. Deborah was now able to fully exercise her entrepreneurial muscles, she worked hard to establish Weststar as the best in the marketplace whilst also capitalising on her flare for marketing.

Choosing to sell two parks during this time, leaving only the larger sites in the better locations, the company was gradually transformed into what she describes as “a lean, mean fighting machine”.

A deal to sell in 2003 was aborted at midnight on the day the contracts were meant to be signed, when the buyers reduced their price at the last minute and Deborah walked away. But the whole process made her think about exiting and in 2005 she finally sold the company to Phoenix Equity Partners in a deal worth £33m whilst retaining a 23% equity stake and an active role within the firm. She later sold her remaining stake when Weststar was sold to Parkdean Holidays for £83m, earning Deborah a further £19m.

After selling Weststar she made her first investment in a market research company, reflecting her interest and experience in marketing, brands and communications.

Deborah Meaden actively supports a number of environmental charities and initiatives including the annual Observer Ethical Awards, which she has judged since 2008. Deborah is a fellow of the WWF, the world's leading environmental organisation and she also acts as a Patron and Trustee for Tusk Trust. In addition she is an Ambassador for Lendwithcare, the Roundhouse, and Marine Conservation Society and a Fellow with the RSA.

Clients often ask about purchasing books for giveaways and delegate packs. Below you’ll find a selection of products by Deborah Meaden. Click the images to view on Amazon's website. For bulk orders, please speak with your Booking Agent.

How to book Deborah Meaden for your event