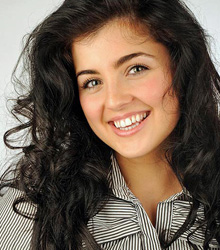 With a background in broadcast journalism, Storm helped launch Scotland's first city TV channel in 2014, STV Glasgow. Initially hired as a weather presenter, she went on to present live reports and weekly compilation programmes, bringing back reports from as far as Brazil and Jamaica and also hosted the nightly flagship magazine-style program, The Riverside Show.

Storm studied Economics and Politics at Glasgow University and went on to do a Postgraduate Diploma in Broadcast Journalism at London University of Arts. It was at university that Storm fell in love with radio, becoming involved in student and hospital radio. In 2008 she helped set up a community radio station in Hammersmith, west London called OnFM, where she presented a weekly interview-based show.

After graduating, Storm earned her stripes working as a researcher on BBC Scotland News, The Big Question and BBC Scotland debate programmes. She then moved to presenting travel and weather bulletins for BBC Radio Scotland as well as producing a weekly political referendum webcast for the BBC website.

Whilst at Glasgow University, Storm volunteered at a Children's Hospital Radio station called Radio Lollipop, going around the wards, interviewing the kids and getting them on air. Storm also volunteered at the university station Subcity, working on a weekly music show called Motown Versus.

After graduating she came down to London and helped set up a community radio station in Hammersmith called 101.4 OnFM and became their main presenter. She presented a show twice a week: one show was very music based with a look at what things were going on in the city; the second was called Live Wires, which Storm co-hosted with Declan Harvey (now a NewsBeat reporter for Radio 1). Live Wires was a magazine format which featured live and pre-recorded interviews with actors, bands, poets, politicians and community workers from the area.

After that Storm presented another magazine style show for Roundhouse Radio, which featured a mix of interviews and music.

How to book Storm Huntley for your event