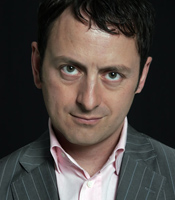 Matt Allwright is one of those rare things - a versatile presenter and journalist who brings his own distinctive style and integrity to everything he does.Take a look at his trademark programme, Rogue Traders, and it's clear that you're dealing with someone who mixes groundbreaking journalism with effortless delivery - a producer's dream.

Matt Allwright's consistent success is based upon solid credentials and hard work. After qualifying as a broadcast journalist, he started out as a presenter and producer in BBC newsrooms. In 1997 the call came from BBC1's flagship consumer programme Watchdog. He stayed there for 4 years, working his way up from presenting weekly live outside broadcasts to anchoring the programme live in studio when Anne Robinson finally decided to hang up her stiletto boots. All by the age of 29.

In 2001 came the perfect match of programme to presenter - BBC1's Rogue Traders. Matt made the format his own, injecting his own brand of humour into his scripts and displaying true grit in the thrilling confrontations which end the show.

Matt's efforts have blossomed into a number of other prime-time opportunities, making him a true face of BBC1. In 2003 Scambusters took the Rogue Traders idea overseas to turn the tables on con artists who target us Brits. Brassed Off Britain campaigned for better service for British customers, culminating in a live studio debate with the captains of 10 national industries. In 2004 Fat Nation, a major BBC1 campaign, took the fight for healthier living into the front rooms and fridges of the UK, as it took over an entire street in Birmingham for 9 weeks. He also found time to become Celebrity Mastermind 2004.

2005 saw the 4th series of Rogue Traders continue to scale new heights in audience figures and critical acclaim as it was regularly the country's favourite factual watch. Matt's transformation into Roger, a 75 year old Welshman made it one of the TV moments of the year. More are anticipated.

Matt Allwright lives with his missus and two children. He rides motorbikes, plays the guitar and sings with a wedding band.He supports Liverpool Football Club.

How to book Matt Allwright for your event