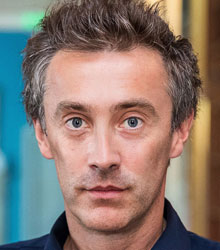 Dallas is one of the most versatile and well-travelled factual presenters working in the industry.

He has filmed in some of the most extraordinary and challenging locations all over the world: sewer diving in Mexico City, abseiling off the world’s tallest building in Dubai and filming Tim Peake’s rocket launch to the international space station.

Most recently, Dallas has presented Positive Energy (National Geographic) where he travelled the globe, with co-presenter Kari Byron, meeting the innovators that are creating new ways to power our world into the future. His debut book Ad Astra: An Illustrated Guide to Leaving the Planet was published 2017.

Dallas started his presenting career on The Gadget Show (Channel 5) and Bang Goes The Theory (BBC1). He has since presented some of the most ambitious landmark series across the BBC and beyond: Britain Beneath Your Feet, Tutankhamun: The Truth Uncovered, The Treasure Hunters and Supersized Earth (BBC 1), City In The Sky and Airport Live (BBC 2), Voyager: Beyond the Final Frontier, The Drake Equation: The Search for Life and The Sky at Night (BBC 4), Science of Stupid and Time Scanners (Nat Geo). He is a regular presenter of BBC4’s Horizon Guide series.

Dallas has also presented Television’s First Night – recreating the first TV broadcast for the 80th anniversary of BBC television and Stargazing Live (BBC 2) which broadcast Astronaut Tim Peake’s historic launch to the International Space Station live from Kazahkstan (BAFTA nomination). Other projects include: Dallas Campbell’s Guide to the Impossible for Discovery Channel and guest appearing on Infinite Monkey Cage (BBC Radio 4). He has previously won Celebrity Mastermind, his specialist subject being the films of Werner Herzog.

Dallas is an Honorary Fellow of the British Science Association and regularly judges their annual Young Scientist & Engineer of the Year awards. In 2014 he gave the Stoneley Lecture for the Petroleum Exploration Society of Great Britain. This year he won The Space Achievement Media Award at Sir Arthur Clarke Centenary Awards.

Experienced working in a live environment, Dallas has hosted countless roadshows with the Bang Goes The Theory team and worked on many other science events, including the monthly Science Museum Lates. In 2016, Dallas presented the social media coverage for Shell’s Make the Future London Festival, interviewing Formula One driver Kimi Raikkonen.

When not risking life and limb investigating life, the universe and everything, Dallas enjoys cooking and is an accomplished amateur magician. He was also a ski instructor in the Cairngorms. He has two children.

Dallas Campbell is available for a variety of corporate work including awards hosting, conference facilitating, speaking, or anything gadget, technology or science related!

Thank you so much for your wonderful lecture to Flamsteed Astronomy Society on Monday. It was a real highlight for us and we had some lovely comments from viewers. I’m sure everyone was applauding appreciatively and enthusiastically at the end of your talk – their comments bear witness to this. Once again, many thanks.

Dallas was a great host throughout the day- he kept the energy throughout and was great with both the adults and children. I always love working with Dallas and hope to do so again in the future.

The performance was excellent, wry, different, entertaining, informative. Dallas was very entertaining and explained things well with lots of humour. Awesome show! More of this, please!

We Choose to go to the Moon with Dallas Campbell, Northcott Theatre

A huge thank you from our team for being such a great host and so easy and professional to work with. It was a fab night and the audience obviously had a great time – livestream is over 22K views and climbing steadily. Wishing you the very best for the future and hope to work with you again.

Dallas was absolutely brilliant, he pitched his speech at exactly the right level, he was outstanding with spotless delivery , was very engaging and a very nice chap. The PESGB feel they will be hard pushed to find a better speaker, Dallas was simply fantastic.

Clients often ask about purchasing books for giveaways and delegate packs. Below you’ll find a selection of products by Dallas Campbell. Click the images to view on Amazon's website. For bulk orders, please speak with your Booking Agent.

How to book Dallas Campbell for your event