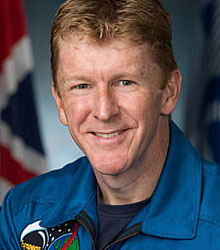 In 2015, Tim Peake became the first British astronaut to visit the International Space Station and conduct a space walk during six months in orbit.

His mission engaged more than two million students in outreach activities. He's an ambassador for STEM education, The Prince's Trust and the Scout Association.

A former Apache pilot, flight instructor, test pilot and European Space Agency astronaut, Tim Peake is a veteran of 18 years military service. While aboard the ISS, he completed approximately 3000 orbits of the Earth and had covered a distance of 125 million kilometres.

Born in 1972, Tim had a passion for adventure from an early age. The Cub Scouts and school Cadet Force gave him a taste for the outdoors and he was never happier than when he was hiking, kayaking or climbing.

Aged 13, Tim's dream of becoming a pilot became reality when he took control of an aircraft for the first time. It sparked a passion for flying that has been a driving force throughout his career. By the time he was 18, he had already flown numerous solo sorties and been awarded a coveted position to join the British Army Air Corps.

As a young second lieutenant, Tim's leadership skills were put to the test on the troubled streets of Northern Ireland, serving as a Platoon Commander on attachment to the Royal Green Jackets prior to commencing his flying training. He gained his Army Flying Wings in 1994 and was awarded best student on his course.

Whilst his peers were following more traditional officer career paths, Tim fought to become a flying instructor – a move that would shape his future and ultimately lead to him becoming an astronaut. After a year teaching students the art of military flying, he was selected for an exchange posting to the 1st US Cavalry Division in Texas, flying the fearsome Apache attack helicopter.

Highly sophisticated and technically demanding, the Apache appealed hugely to Tim's thirst for new challenges. His time with the US Army taught him the importance of international co-operation and the benefits of forging strong partnerships.

Promoted to Major and with over 2000 hours of flying experience, Tim's career was about to take an important turn. He applied for the Empire Test Pilot's School and, following a gruelling selection process, was accepted onto the prestigious course. As someone who left school aged 18 with three unexceptional A-levels, Tim did not have the greatest academic start in life. However, he is a testament to the fact that with hard work and determination anything is possible.

After nearly 18 years military service, Tim left the Army in 2009 to work as a senior test pilot. At the same time, having seen a recruiting advert from the European Space Agency (ESA), he underwent a rigourous yearlong astronaut selection with 8000+ other hopefuls.

Tim was selected as an ESA astronaut in May 2009 along with five classmates. He had to learn Russian in addition to understanding the science and engineering of space flight. Astronaut training covered a plethora of topics as diverse as dentistry, minor surgical procedures and survival training. Parabolic flights, AKA the 'vomit comet', gave astronauts their first taste of weightlessness and underwater training allowed crews to perform simulated space walks for hours at a time, whilst the centrifuge prepared them for the punishing g-forces of launch and re-entry.

Teamwork and communication are vital skills for any successful space mission. Tim spent seven days exploring a cave network deep underground Sardinia with four other astronauts from Russia, Japan, Europe and the USA. In additional to understanding cultural differences, this environment allowed the astronauts to develop their leadership skills under stressful conditions.

Tim was assigned a mission to the International Space Station in 2013. After further training with his crew-mates Tim Kopra and Yuri Malenchenko, he launched to space on 15 December 2015.

Tim Peake has delighted and inspired thousands of individuals with his fascinating stories of life in space, breathtaking photographs and unique perspective of planet Earth.

After Dinner Speaking & Keynote Speaking
A champion for science and innovation and an ambassador for Science, Technology, Engineering and Mathematics (STEM), Tim is passionate about inspiring the next generation of scientists, engineers and explorers.

His years as a British Army officer, test pilot and astronaut give him a unique insight into leadership, risk management, motivation, collaboration and teamwork as a prerequisite for mission success... and the safe return to planet earth.

Whether he’s delivering a fun, fascinating and informal after dinner speech, or presenting a serious conference keynote, Tim Peake draws on his own unique and literally “out-of-this-world” experiences to inspire audiences with his recipe for mission success and Peak(e) performance.

Fireside Chats & Q&A Sessions
Tim Peake is also available for fireside chats and Q&A sessions, where he can be interviewed on stage by space journalist and astrophysicist Sarah Cruddas, also represented by NMP Live.

With her unparalleled knowledge and experience in the industry, Sarah is also the preferred interviewer for Buzz Aldrin and was recently personally requested to chair a closed-door conference at Bill Gates’ house in Seattle, attended by the world’s elite business leaders including Amazon’s Jeff Bezos.

Inspirational and impactful, captivating a very knowledgeable and experienced aviation audience with powerful lessons of leadership, dealing with uncertainty and change, and the impact of future technology.

Tim achieved such a powerful connection between our work here on earth and his experience of witnessing the world from space. This lens was so powerful in helping people to understand the impact of climate change in a meaningful and real way. We can’t thank Tim enough for taking the time to be with us and for sharing his inspirational message.

An inspirational evening. Tim Peake captivated the audience with his fascinating insight into the rigours, challenges and wonder of space exploration.

Tim’s inspirational evening exceeded our wildest expectations. Tim captivated an audience of all ages with thrilling tales of space and fascinating science lessons. And his touching answer to a young boy who dreamed of being an astronaut moved the audience to tears.

Tim Peake’s webinar to our employees for World Mental Health Day was both inspirational and impactful. Tim’s explanation of his physical and mental experiences before, during and after his time on the ISS gave employees a depth of insight that many were able to recognise as they live through the impacts of the pandemic. Tim’s warm and friendly manner together with his enthusiastic communication style brought his slides and photographs to life with such power- his collection of photographs from the ISS really are amazing. Tim connected with our diverse audience on many levels. My involvement with Tim in the preparation for the event was made very easy due to his friendliness, preparation and cool, calm approach. I would highly recommend Tim for events of this type; he was a huge hit with our employees!

Clients often ask about purchasing books for giveaways and delegate packs. Below you’ll find a selection of products by Major Tim Peake. Click the images to view on Amazon's website. For bulk orders, please speak with your Booking Agent.

How to book Major Tim Peake for your event