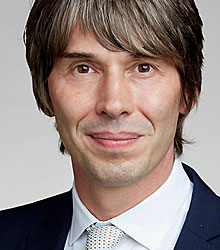 Frequently labelled a 'rock star scientist', Professor Brian Cox is Professor of Particle Physics at The University of Manchester, The Royal Society Professor for Public Engagement in Science and a Fellow of the Royal Society.

With several blockbuster TV shows under his belt, including Wonders of the Universe, and Wonders of the Solar System, Brian Cox argues that science can unite the world in an attempt to discover our shared origins.

His acclaimed science programmes for the BBC have exponentially boosted the popularity of subjects such as astronomy and physics, garnering a host of accolades, including two Royal Television Society awards and a Peabody Award for Wonders Of The Solar System.

He has also authored a series of best-selling books, including the widely acclaimed Human Universe and the recently released Universal: A Guide to the Cosmos, and is recognised as the foremost communicator for all things scientific. His critically acclaimed BBC series, Forces of Nature, aired in 2016 whilst he recently once again co-hosted Stargazing Live.

He holds two Guinness World Record titles for a science tour for his total sell-out debut tour, which began in 2016 and saw over 150,000 attend in total, including a sell-out show at Wembley Arena.

Brian Cox began his career not as a physicist but as a rock star, when his band Dare signed a deal with A&M records in 1986. Dare recorded two albums and toured with Jimmy Page, Gary Moore and Europe before breaking up in 1992.

Brian then joined the band D'Ream, whose song 'Things Can Only Get Better' was famously used by Tony Blair as the Labour Party election song in 1997. During the D'Ream years, Brian obtained a first class honours degree in physics from the University of Manchester and a PhD in High Energy Particle Physics at the DESY laboratory in Hamburg.

In 2002, he was elected an International Fellow of the Explorers Club and in 2006, he received the prestigious British Association Lord Kelvin award for his work in promoting science to the public.

In 2005, Brian was granted a Royal Society University Research Fellowship and in 2009 became Professor of Particle Physics at the University of Manchester. He was awarded the CBE by HM The Queen in the 2020 Birthday Honours.

Taking audiences to the edge of our current understanding about the origin and evolution of our Solar System and the Universe, Professor Brian Cox offers a fascinating insight into the workings of nature at the most fundamental level.

Whether an avid science reader or a total novice, Professor Cox makes challenging ideas accessible to all, exploring the vast, possibly infinite universe and our place within it from earth to the edges of the cosmos.

Professor Brian Cox is perhaps the world’s foremost communicator of all things scientific. His innate ability to make highly complex matters enormously entertaining and easy to contemplate has made his after dinner speeches and keynote speeches ground breaking in their audience reach and accessibility.

From speaking at TED in the USA to World Economic Forums in Davos and China, Brian’s presentations engage, inform and entertain. Whether an avid science reader or a total novice, Professor Brian Cox tests the limits of our knowledge and makes highly complex ideas accessible to all.

Always captivating, continually surprising and forever pushing the boundaries, Professor Brian Cox takes science to a new dimension. His after dinner speeches take audiences on a dazzling journey through space and time, delving into ‘high science’ and freewheeling on the edges of the known cosmos.

Clients often ask about purchasing books for giveaways and delegate packs. Below you’ll find a selection of products by Professor Brian Cox CBE. Click the images to view on Amazon's website. For bulk orders, please speak with your Booking Agent.

How to book Professor Brian Cox CBE for your event