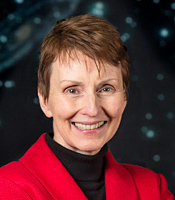 Helen Sharman is a British scientist and astronaut. She became the first Briton in space in 1991 when she launched on a Soyuz spacecraft to spend 8 days orbiting the Earth, most of that time on the Mir Space Station.

Following her space flight, Helen became a science communicator and keynote speaker, winning prizes for radio and television programmes and giving inspirational talks around the world on teamwork and motivation.

She sometimes meets science teachers who were themselves inspired to study Science after hearing her speak. Some people have changed their whole lives after listening to Helen.

After responding to a radio advertisement, Helen was one of two Britons selected for astronaut training out of almost 13,000 other applicants. The programme, named Project Juno, was a co-operative arrangement between the Soviet Union and a British company set up to manage the Mission.

Helen Sharman was subjected to a rigourous selection process that focussed on psychological and medical assessments, technical understanding and practical skills as well as the ability to learn a foreign language.

This was followed by 18 months of intensive flight training in Star City near Moscow, where learning to speak Russian and getting to know the cosmonauts' families were part of her new way of life, along with preparing for weightlessness, learning how to cope inside a cramped space capsule and how to deal with a landing in the sea.

During the launch, Helen carried out her share of spacecraft operations. Once in space, her tasks included medical, agricultural and chemical experiments, materials' testing, Earth observation work and operating an amateur radio link with British school students. Fitted in with this were media interviews and a telephone conversation with President Gorbachev.

Coping with risk was a daily activity and teamwork was a vital element in the success of the Mission. Helen Sharman was not quite 28 years old when she became an astronaut. She was (as of 2014) the fifth youngest person in space. Although Helen has never returned to space, like every other astronaut she would love to be up there again, experiencing the weightlessness, the camaraderie and the views.

Helen Sharman was born in Sheffield and received her BSc in Chemistry at Sheffield University. She worked in Research & Development as an engineer for GEC before moving to Mars Confectionery, where she became a Research Technologist working on chocolate and ice cream.

More recently, Helen has managed a research group at the National Physical Laboratory in London. She works full-time at the Department of Chemistry, Imperial College University of London. For her accomplishments in Project Juno, Helen received a star on the Sheffield Walk of Fame. Helen is also an active member of the Association of Space Explorers.

Helen Sharman talks about her exciting and fascinating career and the journey it took to become Britain’s first astronaut. She has spoken widely at corporate, public, government, academic and schools events on subjects including teamwork, leadership and motivation. These relate to her career, training and experiences as an astronaut, which she combines with her subsequent management experience.

Helen Sharman’s talks take her audience on a journey into space, describing the seemingly endless training and preparation, the launch, how weightlessness feels, what it is like living and working in space, the team work and team spirit, and adjusting to life back on Earth afterwards.

I was lucky enough to hear Helen Sharman speak at the recent UK Space Conference in Liverpool. She was a superb presenter - lively, engaging, humorous, honest and insightful - and gave the audience an inside perspective on her selection and mission to the Mir space station.

Thank you very much for speaking at the Human Spaceflight Panel for the Royal Aeronautical Society President's conference this year. The panel discussion was excellent and the feedback outstanding. Your contributions were very much appreciated by the other speakers and attendees. Thank you for the valuable discussion points in both supporting and leading the discussion and for all your contributions on both days of the Conference: it was a great success and would not have been the same without you.

Thank you so much for taking part in this year's Summer School. We had Geography teachers taking part for the first time this year, alongside Scientists. We have seen in them the same excitement about their subject and it is among our principal aims that this should be taken back to the classroom and shared with the pupils themselves.Two specific quotes are “Dr Helen Sharman – amazing. What an inspirational talk, and woman.” and “I will treasure my memory of Helen Sharman's address.”

I am writing to formally thank you for your excellent contribution at the presentation of the Quality Scotland Awards. Feedback shows that the audience was fascinated by your talk and, personally, I am delighted, as it vindicates my choice of guest speaker. The enclosed press cutting from The Scotsman confirms that view.

Clients often ask about purchasing books for giveaways and delegate packs. Below you’ll find a selection of products by Helen Sharman OBE. Click the images to view on Amazon's website. For bulk orders, please speak with your Booking Agent.

How to book Helen Sharman OBE for your event