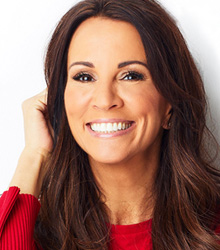 Andrea McLean is best known as an anchor and lead presenter on the award-winning ITV lunchtime talk show Loose Women, before stepping down from the show in December 2020.

Having departed the world of broadcasting, Andrea launched This Girl Is On Fire, the ‘gym for the mind’ dedicated to helping women think differently about themselves, their circumstances and their future.

Before she joined the show in 2007, Andrea was one of the core team of presenters on the ITV breakfast programme GMTV. She left the show after 11 years to concentrate on Loose Women and enjoy the benefits of a full night’s sleep!

Andrea started her career as a freelance travel writer, then became a writer/sub for Central Press Features based in London. Since then Andrea has gone onto write for Red, Best, Scottish Woman and numerous weekly women’s magazines. She currently writes a popular weekly interior design column for The Mirror newspaper and is a freelance writer for the online women’s magazine Standard Issue.

In 2012 Andrea wrote her autobiography Confessions Of A Good Girl which spent two weeks at No. 1 in the Sunday Times Best Seller list. It covered her life growing up on a sugar plantation in the Caribbean, travelling the world as a young backpacker and embarking on the adventurous life of a television presenter.

In 2018 Andrea’s book ‘Confessions Of A Menopausal Woman (Everything You Want To Know But Are Too Afraid To Ask)’ was released.

Andrea graduated with a BA Hons in Modern Studies (History, Politics and International Relations) at Coventry University in 1991. She then went on to backpack around the world, from India and the Far East to Australia and America, taking on jobs as diverse as a grill chef, barmaid, receptionist and factory worker.

Andrea McLean was born in Scotland but was raised in Trinidad and Tobago. She moved back to the UK when she was 15 and now lives in Surrey with her husband and two children.

Andrea McLean has worked across many blue-chip brands and events and is in frequent demand as a corporate event and awards host.

She is also a popular motivational speaker on personal growth, entrepreneurship and female empowerment. The framework for these presentations being her best-selling book, This Girl Is On Fire, all about learning how to be brave, stop living in fear and break out of your comfort zone to find happiness, confidence and strength.

Andrea made the courageous leap in 2020 to leave her successful career as a TV broadcaster to do what fills her soul - and it was terrifying. But she hasn't looked back and now she is on a mission to help you to understand how your fear is restricting you.

Andrea’s motivational presentations will show you how to:
• Unleash your self-belief
• Break the behaviour patterns that are holding you back
• Unlock your courage and use it every day
• Reclaim the power that's been inside you all along

Clients often ask about purchasing books for giveaways and delegate packs. Below you’ll find a selection of products by Andrea McLean. Click the images to view on Amazon's website. For bulk orders, please speak with your Booking Agent.

How to book Andrea McLean for your event