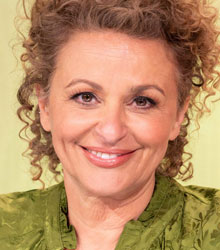 Actor, cook and television presenter Nadia Sawalha is a member of the very successful Sawalha family; daughter of film actor Nadim Sawalha (The Spy Who Loved Me) and elder sister of actress Julia Sawalha (Absolutely Fabulous).

She currently appears on ITV Daytime magazine show Loose Women and was one of the original presenters from its start in 1999.

After winning the 2007 season of Celebrity MasterChef, Nadia Sawalha has continued to make appearances on cookery shows, not only as a presenter, but also as a chef. She also went on to co-present the children's version of the show, Junior Masterchef.

In 2011, she guest-presented ITV Breakfast programme Lorraine and has since made regular appearances on the show, not only as a stand-in presenter but also as the show’s resident chef.

Since 2012 she has presented the UKTV Home series Kitchen SOS and, together with her best friend and fellow Loose Women panelist, Kaye Adams, they have their own YouTube account, Instagram account and Facebook page where they present weekly vlogs, cooking demos, film and TV reviews. They also focus on daily normal family routines as well.

Nadia has previously presented City Hospital, Living In The Sun, Accidents Will Happen, Now Your Talking, Family Exchange, Passport To The Sun, Perfect Partner, Total Everything, It’s Not The Answer, TV Mail and Soapfever.

As an actor, Nadia began her career in theatre, having trained at the Italia Conti Academy of Theatre Arts. One of her most well known television acting roles was as the tough, uncompromising businesswomen, Annie Palmer in the BBC’s flagship drama EastEnders, from 1997-99.

Her other acting credits include Casualty, Which Way to the War and ITV police drama, The Bill. She also appeared in the 1986 film Clockwise alongside John Cleese.

Nadia Sawalha is available for personal appearances, voice-overs and is the ideal host or presenter for industry and corporate award ceremonies.

Clients often ask about purchasing books for giveaways and delegate packs. Below you’ll find a selection of products by Nadia Sawalha. Click the images to view on Amazon's website. For bulk orders, please speak with your Booking Agent.

How to book Nadia Sawalha for your event