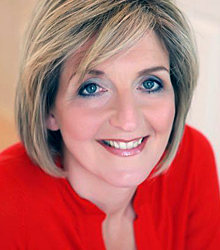 Kaye Adams is one of the UK's most experienced television and radio presenters. She was the original anchor of ITV's multi-award winning daytime show Loose Women, back in 1999, along with best friend Nadia Sawalha, and remained in the anchor chair for seven years before giving in to the demands of two small children. She rejoined the panel in 2013 as a regular anchor.

Graduating from the University of Edinburgh with an MA Honours in economics and politics, Kaye's background is in news and current affairs journalism, having joined Central Television as a graduate trainee straight from the university. After kick-starting her career with an award-winning hour-long interview at 10 Downing Street, with then Prime Minister Margaret Thatcher, Kaye spent the next few years focused on reporting hard news when, in early 1988, she moved to Scottish Television's nightly news programme, Scotland Today. In this role, she was one of the first journalists on the scene to report the PanAm Lockerbie bombing in 1988.

In 1992, a chance opportunity arose to host a discussion show for Scottish Television after its original anchor Sheena McDonald left, which set Kaye off on a different path. Scottish Women ran for six years and won Kaye a number of awards. She quickly found her niche in hosting live discussion shows and debates, picking up two BAFTA Scotland Awards and an RTS along the way. Her numerous other television presenting credits include Thursday Night Live, Esther (long-running stand-in for Esther Ranzten), Scottish Women, Central Weekend Live, her own show on BBC2 'Kaye', The Big Question, The One Show, and regularly standing in for Matthew Wright on C5's The Wright Stuff.

Kaye has been a regular columnist for The Daily Record, The Scottish Sun and No1 magazine, and currently hosts her own daily phone-in show 'Call Kaye' for BBC Radio Scotland, covering topical news and features. For fun and ritual humiliation she has popped up on ITV's Family Fortunes, Big Star, Little Star, Celebrity Squares and The Chase. She came out on top in Celebrity Mastermind and a complete flop in Celebrity Masterchef.

Alongside broadcasting and writing commitments, Kaye Adams is in much demand on the corporate circuit, regularly giving after dinner speeches about her career in journalism and the media.

And as one of the UK's most experienced broadcasters, she is also a natural choice for hosting corporate award dinners and facilitating conferences or symposiums, where she displays a natural ability to quickly grasp complex briefs and communicate key messages to an audience in a personable but informed manner.

An adept interviewer, Kaye is just as comfortable challenging senior business figures and putting them through their paces as she is with junior staff and management.

We were delighted with Kaye Adams as a speaker, as was the audience of staff. The evaluation that we carry out at the end of the conference allows staff to score out of a maximum of 4. Kaye had a score of 3.81 which was the highest of all our presenters.

Clients often ask about purchasing books for giveaways and delegate packs. Below you’ll find a selection of products by Kaye Adams. Click the images to view on Amazon's website. For bulk orders, please speak with your Booking Agent.

How to book Kaye Adams for your event