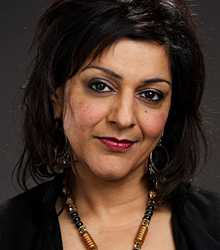 Meera Syal is much-loved for her brilliantly funny performances in television programmes such as the iconic and multi award-winning Goodness Gracious Me (which she also co-wrote) and Emmy Award-winning The Kumars at No.42 in which she played naughty Granny, Ummi Kumar and was nominated for BAFTA for Best Comedy Performance. In 2003 was listed in The Observer as one of the fifty funniest acts in British comedy

Meera’s parents emigrated from New Delhi in 1960 and she was born in Wolverhampton in the West Midlands and educated at Manchester University where she read English and Drama, gaining a rare Double First. She is also an acclaimed and popular author.

Her childhood experiences growing up in a small Black Country mining community, as literally “The Only Asians In The Village”, provided the background to her first novel Anita and Me. The novel was shortlisted for the Guardian Fiction Prize and won a Betty Trask Award and Meera adapted the screenplay for the BBC film that followed. The novel is now also a recommended text on the school curriculum. Meera is also the author of Life Isn’t All Ha Ha Hee Hee, about the loves, lives and infidelities of three East London Asian women, and adapted this into aRIMA winning BBC series in which she played one of the lead roles. Her critically acclaimed third novel, The House Of Hidden Mothers was published in June 2015 and subsequently made into a three part television series.

Meera Syal’s acting career has continued to flourish across stage and screen. She has been on our television screens in popular shows such as Broadchurch, Doctor Who andAbsolutely Fabulous, and more recently alongside Jack Black and Tim Robbins in HBO’s The Brink. On film she has worked with an array of great directors including, Woody Allen, (twice) Terry Jones and Stephen Frears.

Her work in theatre has seen Meera perform in leading roles at The National Theatre, The Old Vic and the Royal Court to name but a few, and she recently played Beatrice in Much Ado About Nothing at the Royal Shakespeare Company in Stratford Upon Avon. She also played Shirley in Willy Russell’s iconic Shirley Valentine in the West End for which she won the Whats On Stage Solo Performance award. Although one of her proudest moments was tracing her revolutionary family tree in the BBC’s Who Do You Think You Are.
Meera is the recipient of 11 National Awards including the Women In Film and Television’s Creative Achievement Award (2008) and in 2011 she was visitingProfessor of Theatre at St Catherine’s College, Oxford University.

Meera was appointed Member of the Order of the British Empire (MBE) in the 1997 New Year Honours and a CBE for Services To Drama and Literature in the 2015 New Year’s Honours List. She is also a proud ambassador for Breast Cancer Care and The Alzheimer’s Society, and the long standing patron of Newham Asian Women’s project which provides refuges and advice for women and children escaping domestic violence.

Meera Syal is a popular after-dinner speaker and awards host who can provide unique and witty insight into women’s and cultural events.

Meera Syal was fantastic and shared some great stories with us!

Exactly the right combination of humour and professionalism.

How to book Meera Syal CBE for your event