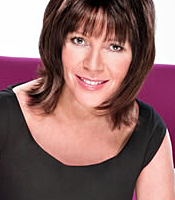 She has been a host on Loose Women and often guests on panel and comedy shows, including Ant & Dec's Saturday Night Takeaway, Keith Barry's Magic Show. She was even caught by Eamonn in bed with Rob Brydon on Annually Retentive!

Ruth is also a writer and is currently a weekly columnist for Woman magazine. She has fronted high profile commercial campaigns, is a voice-over artist and charismatic awards host and conference facilitator at corporate events. She has also narrated documentaries for Channel 4, Five and the History Channel, as well as corporate videos and radio commercials.

A keen gardener, Ruth Langsford presented The Great British Garden Show on BBC2, ITV's gardening quiz show The Answer Lies in the Soil and Gardens of the Millennium for The History Channel.

Her career started at ITV in the Westcountry 25 years ago where she fronted the evening news programme and presented her own chat show. From there, she moved into national television and has fronted shows for BBC1, BBC2, ITV and severaldigital channels. Born in Singapore, the child of an army family, Ruth lived in five countries before the age of 10, ranging from Germany to North Africa. She's a keen DIY-er and seamstress, with her own toolbox and sewing machine! She's also badly claustrophobic and suffers from chronic seasickness.

Ruth and Eamonn live in Surrey with their son Jack.

How to book Ruth Langsford for your event