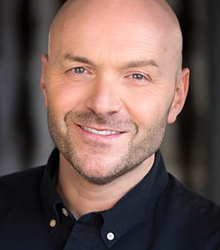 Simon Rimmer is best known as the co-presenter of Channel 4's Sunday Brunch alongside Tim Lovejoy, the morning show which wakes the nation up on a Sunday with a mix of chat, current affairs, guests and food.

He has a wealth of TV experience and has appeared across many channels including BBC, ITV, C4, C5 and UKTV. Simon's popularity and media profile really took off when he landed a role on the BBC2 Sunday show - Something for the Weekend, on which Simon cooked and interviewed guests.

Simon originally studied fashion and textile design and later taught himself to cook. In 1990, he bought Greens, a vegetarian restaurant in West Didsbury, Manchester in 1990. Simon opened his second restaurant, Earle, in Hale in October 2006, though this was later sold to a local restaurateur in 2016. In 2013, Simon served as a judge for British Sausage Week, helping to choose the winners and promote the event.

He has presented and cooked across many shows and channels including BBC, ITV, Channel 4, Channel 5 and UKTV; and his numerous credits include Tricks of the Restaurant Trade, Breaking into Tesco’s, Eat the Week, Great British Menu and Win It, Cook It.

Simon has also appeared as a contestant on various TV shows. In 2006, he pitted his cooking talents against other skilled chefs on the first series of Great British Menu; losing in the North of England heat to Marcus Wareing. In 2008, he appeared on Celebrity Mastermind, choosing 'The History of Tranmere Rovers' as a specialist subject. In 2017, Simon took part in the fifteenth series of BBC1’s Strictly Come Dancing.

Simon is a chef and owner of 12 restaurants in the north west of England, one in Dubai and another in Abu Dhabi. As a restaurateur this is where Simon's real passion for food began as a career, and he continues to cook in the restaurants every week, which he enjoys immensely; but also keeps him in touch with the culinary trends of the moment.

Away from television, Simon Rimmer is a big football fan and he is involved with Manchester City Football Academy teaching young up and coming players, about eating, nutrition and cooking at specially designed cookery courses.

Simon Rimmer frequently works with brands on PR campaigns, and corporate events. He is also a favourite at food festivals and demonstrations across the country. He has in the past appeared at BBC Good Food Show and Grand Designs, as well as many local and regional events across the UK.

Simon’s theatre went down a storm with our delegates. He is such a great personality and was so flexible.

Clients often ask about purchasing books for giveaways and delegate packs. Below you’ll find a selection of products by Simon Rimmer. Click the images to view on Amazon's website. For bulk orders, please speak with your Booking Agent.

How to book Simon Rimmer for your event