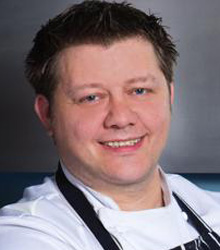 Mark Greenaway received nationwide acclaim following the opening of his eponymous restaurant in Edinburgh in February 2011.

In 2012, it was the only restaurant in Scotland to be newly awarded three AA rosettes for outstanding cuisine which it has retained since, as well as 13th place in Square Meal’s Top 100 UK restaurants 2016, for the second consecutive year, and Scottish Food Awards & Academy’s Contemporary Dining Destination of the year 2017.

Mark’s debut book, ‘Perceptions: Recipes from Restaurant Mark Greenaway’, was published in July 2016 and won the Gourmand World Cookbook Award for Best Chef cookbook 2017. He has written for Edinburgh Evening News and Scotland Now, and a fortnightly recipe column for The Herald.

In 2014, Mark Greenaway appeared live as a guest on BBC’s Newsnight and as a guest chef on BBC 1’s Saturday Kitchen, and Channel 4's Sunday Brunch. He is a weekly guest chef on STV Edinburgh’s The Fountainbridge Show. He represented Scotland on BBC2’s Great British Menu in 2012 and again in 2013. Mark mentored a group of teenagers as they endeavoured to launch a healthy take-away business, filmed for 3-part documentary series Teen Canteen on BBC2 in November 2013.

With a career beginning in Scotland in 1992, Mark then went on to gain valuable experience during a five year stint in Australia, working at some of the nation’s top establishments. Returning to Scotland, he continued his profession at One Devonshire Gardens in Glasgow, Kilcamb Lodge Hotel in Strontian and The Dryburgh Abbey Hotel in the Scottish Borders.

Mark Greenaway has a passion for Scottish ingredients, and uses only the very best local, seasonal produce, transforming them with modern techniques. Mark is a popular spokesperson for Scottish brands and has collaborated with Bowmore whisky, Nairn’s Oatcakes, Tennents Whisky Beer, and was an ambassador for Scotland Food & Drink.

Mark has supported campaigns for Cyrenians, Bowel Cancer UK, Marie Curie, Barnardo's Scotland, Breakthrough Breast Cancer, and MacMillan Cancer. He is the regional partner chef for Scotland supporting Le Cordon Bleu UK Scholarship Award, and an ambassador for the Prince's Trust and Young Scot, helping to train and support young people looking for a start in the hospitality industry.

Clients often ask about purchasing books for giveaways and delegate packs. Below you’ll find a selection of products by Mark Greenaway. Click the images to view on Amazon's website. For bulk orders, please speak with your Booking Agent.

How to book Mark Greenaway for your event