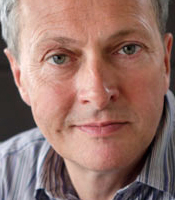 Nick Nairn is Scotland's best-known chef and one of the country's most popular figures. He is in high demand as chef, consultant and media personality, and is a prominent spokesperson on diet, healthy eating and Scottish produce.

In 2007 Stirling University recognised this and awarded Nick an honorary decorate for his outstanding contribution to Scottish cuisine and work in promoting healthy eating. He uses his integrity, entrepreneurial spirit and talents to spread the word about Scotland's wonderful natural larder and in helping people cook and eat better.

With a host of cookery books, an award for his outstanding contribution to Scottish cuisine and experience in preparing exquisite meals, including the Queens 80th birthday dinner, Nick's book sales are well in excess of 500,000 copies.

Nick Nairn is also a highly accomplished and experienced television presenter. He is a brilliant TV cook and great at getting across his enthusiasm to his audience. He has been involved with countless shows including presenting food issues on BBC Scotland's rural affairs programme Landward, as well as The One Show, Taste the Nation, Put Your Menu Where Your Mouth Is and Eating In The Sun, and is often to be seen on Saturday Kitchen.

Past work includes Ready Steady Cook, Who'll Do The Pudding, Back to Basics, and Nick Nairn and the Dinner Ladies. He started his television career with three exclusive television series Wild Harvest, Wild Harvest 2 and Island Harvest, and did exceptionally well in the first Great British Menu, resulting in his cooking Scottish venison for the Queen's 80th birthday banquet.

Nick Nairn started his working life travelling the oceans in the Merchant Navy and relished sampling street food all over the world. Returning home to Scotland he tried cooking some of the dishes he'd tasted and found an untapped talent. He taught himself the skills that led to becoming Scotland's youngest Michelin-starred chef in 1991 at his first restaurant, Braeval, in the Trossachs. He went on to open Nairns restaurant in Glasgow in 1997 to international acclaim.

In 2012, Nick set up The Menteith Group, a campaigning group of food providers, farmers, chefs and others dedicated to improving school meals and food education in Scotland. This has since produced The Scottish Food Family, with the same aims but inviting the general population to be a part of the group.

Motivational & Keynote Speaking
Nick Nairn’s passion for a number of subjects from health and diet, what we feed our children, salt versus flavour, fresh versus processed, organic versus GM, means he talks articulately, knowledgeably and amusingly on a whole host of issues. He is at ease in most locations and venues, speaking to a room of 10 or a hall of 500, and has a genuine desire to share his food knowledge and champion Scotland’s larder.

Nick Nairn, as chef and entrepreneur, is also an inspiring business coach and motivational speaker, relating tales of his life and business experience – teaching himself from scratch and building up his foodie empire, with ups and downs on the way – to help others along their path to success.

Private Host/Guest
Nick Nairn is often called on to attend or host gatherings of all sizes and styles, from charity events to grand parties, to guilds to meetings. His presence will enhance any engagement and his approachability, professionalism and patience are always evident. He will talk privately and publicly about his love of good food as well as bugbears about our eating habits. He will boost any event to which he agrees to attend, whether as a host or guest.

As an energy company we are always happy to work with people who share the same principles and deliver key messages around energy efficiency. It has been a pleasure to work with Nick Nairn and the team over the last 5 or so years and we have always found them to be very professional and friendly to deal with whilst offering an outstanding service and product.

Nick Nairn was an absolute joy to work with, very easy going and a true professional throughout. He's a firm favourite with the public and really helped me achieve the brand awareness I was looking for. I would certainly recommend working with him and plan on using him again for further campaigns.

Environmental principles are at the heart of Nick Nairn's business; from sourcing local produce, to looking at alternative forms of energy. It is for this reason that Nick was asked to present at the Green Your Business Event held in East Lothian, November 2008. Nick attracted a crowd of more than 100 delegates and delivered an inspirational presentation about how his approach to business can be adopted by others.

We have been working with Nick Nairn for many years now and he is a perfect ambassador for the Falcon brand. His passion for cooking along with his respect for the Falcon product is reflected in everything he does for us and this enthusiasm is in turn passed on to our consumers.

Nick Nairn gave an outstanding presentation which gave much food for thought to the audience. Everyone was captivated by Nick's passion, energy, insight and practical tips that the audience could take away.

Clients often ask about purchasing books for giveaways and delegate packs. Below you’ll find a selection of products by Nick Nairn. Click the images to view on Amazon's website. For bulk orders, please speak with your Booking Agent.

How to book Nick Nairn for your event