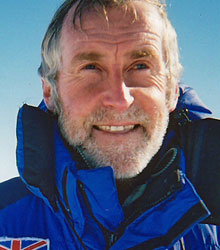 Miles Hilton Barber has been blind for over twenty years but has not let that stop him from challenging barriers, seeking adventure and succeeding on expeditions to deserts, mountains and the polar regions.

Miles grew up in Zimbabwe with normal sight, dreaming of one day becoming a fighter pilot like his father.

At 18, Miles applied to join the Royal Rhodesian Air Force, but to his utter disappointment he failed the eyesight medical. Then at 21, both Miles and his brother Geoff were diagnosed with Retinitis Pigmentosa, a genetic eyesight condition that would lead to total blindness for them both.

For the next 30 years, Miles lived with a kind of ‘victim mentality’, believing the established thinking that blindness was a massive barrier preventing him from undertaking any adventurous exploits.

At 50, Miles Hilton Barber’s life radically changed through the example of his blind brother Geoff who set an amazing World Record, becoming the first blind person in world history to cross an ocean solo, sailing from Africa to Australia unaided in a yacht that he built himself. Wow! What an amazing achievement!

This was Miles’ big ‘wake up call’ so to speak, for the first time understanding the life principle that the key to success in life is not our external circumstances, but our inner response to them – “attitude is what determines altitude!”

Since then Miles has had the huge privilege of setting numerous world records undertaking extreme events across all seven continents of our world in the fields of mountaineering, desert and polar ultra-marathons, powerboat racing, scuba-diving, motor-racing and long distance, aerobatic and supersonic flying amongst other achievements.

Miles Hilton Barber has now spoken at 1,500+ corporate events in 74 countries around the world to-date, sharing the transforming life lessons he has learned along the way, typified by his life philosophy that “The only limits in your life are those you accept yourself.”

Miles Hilton Barber is an exceptional storyteller and keynote motivational speaker whose emotive messages come wrapped in a package of humour and profound personal insight.

He uses his experiences as an international adventurer to motivate and inspire others to achieve their potential. His words are not hollow generalisations - he offers practical ideas that work for everyone, and Mile’s managerial background complements his skills as a speaker, enabling him to tailor his talks to a client’s particular business and workforce.

Miles is one of the most widely sought-after motivational speakers on the world circuit today, having had the privilege of speaking at over 1,400+ corporate events in 73 countries around the world to date.

Despite losing his sight in his early twenties, his quality of life and level of success was radically transformed at the age of 50, not through sight restoration, but through changing his attitude to his blindness. Since the age of 50 Miles has set numerous world records undertaking extreme endurance events across all seven continents of our world, in the fields of mountaineering, desert and polar ultra-marathons, powerboat racing, scuba-diving, motor-racing and long distance, aerobatic and supersonic flying amongst other achievements.

His presentations outline a radical yet simple set of life principles that will enable businesses and individuals to become more successful today, despite facing unprecedented global change. These principles are wrapped up in a fast-moving, colourful and humorous presentation, with photos and video clips from his many expeditions and adventures.

Miles Hilton Barber will challenge you to look at how you can achieve so much more than you think you can in both your professional and personal life, because the only limits in your life are those you accept yourself.

is presentations are entertaining, motivating and inspirational, sharing with his audiences the things he would want to hear if their roles were reversed. "I want them [the audience] to feel they are looking inside the hearts and minds of the people who worked together as a team, took risks, extended the envelope, and made an impossible dream a reality," he says.

As a popular after-dinner and keynote motivational speaker, Miles Hilton Barber weaves together rich anecdotes and humour with powerful life-lessons he has learnt whilst overcoming his blindness covering themes such as:

Miles was fantastic! An inspiration to our people on both a professional and personal level. The feedback from the team was testimony to how Miles touched so many of them and the fact that we have gone back again and again to have Miles speak to different groups within our organisation is testimony to the value that he adds.

Hearing Miles speak is truly inspirational. He is living proof of the old adage 'there's no such word as can't'. This amazing man is an unparalleled force for motivation and I have every possible respect for his talents as a speaker as well as his incredible personal courage.

If you have never had the privilege of hearing Miles Hilton-Barber speak then you are in for a rare treat. Miles exudes confidence, electrifying his audience with his escapades, whilst challenging them to attain new heights of excellence and all with a humility and sincerity that compels his audience to beg for more. His courage, self-motivation and humour make him an absolute delight and I for one could listen to him over and over again. A truly motivational experience not to be missed.

Miles Hilton-Barber offers a truly inspirational insight into his amazing adventures. He demonstrates, in his presentation, the energy that has driven him to achieve so much. In listening to Miles you are forced to consider the limits you have set on yourself, and to search your mind and soul as to what you could potentially achieve.

I found your talk absolutely gripping, humbling and inspirational.

We don't normally attend the plenary sessions, but to miss out on Miles Hilton-Barber's talk would have been a disaster. It was one of the most inspirational, hilariously funny, and seriously motivating speeches I have heard. If I had been attending a religious meeting I would have left as a convert...

Brilliant! Highly entertaining, informative and motivating. A great example of courage, determination and will power!

It was a privilege to hear you speak at the ICFM Conference. You so inspired me by your words, your achievements, your example, your positiveness, your 'you' that I returned to my desk reinvigorated and reassured that I can make a difference and can achieve what I might have previously thought of as 'impossible'. Thank you.

Clients often ask about purchasing books for giveaways and delegate packs. Below you’ll find a selection of products by Miles Hilton Barber. Click the images to view on Amazon's website. For bulk orders, please speak with your Booking Agent.

How to book Miles Hilton Barber for your event