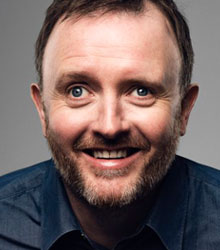 Chris McCausland is a stand-up comedian and actor from Liverpool. He has been performing stand-up for two decades and has long been established at the very top of the UK's comedy circuit.

He has appeared three times on the BBC's flagship stand-up show Live at the Apollo, the long running comedy panel show Would I Lie To You? and Have I Got News For You.

In November 2021, he was seen by millions when he made his debut on the Royal Variety Performance, which was filmed at The Royal Albert Hall in front of The Duke and Duchess of Cambridge.

Chris McCausland is blind and lost his sight gradually due to a genetic condition called Retinitis Pigmentosa. It deteriorated steadily throughout his life, with most of it going during his late teens.

Chris comments: “I used to have a guide dog, but it turns out that he wasn’t very good. It was my first dog and so I didn’t really have a frame of reference. He used to take me wherever he wanted to go and didn’t really listen to me. Maybe he was deaf, which would be ironic, I suppose.”

Prior to becoming a comedian, Chris graduated in 2000 from Kingston University with a BSc Honours in software engineering. After a spell as a web developer, deteriorating eyesight prompted a change of direction, and he worked in sales for a number of years, during which time he first performed stand-up comedy at a new act comedy night in Balham in 2003.

Within his first year of performing, Chris won the Jongleurs J2O Last Laugh competition, came runner up in the Laughing Horse New Act of The Year and placed third in Channel 4's So You Think You're Funny competition.

Between 2005 and 2012, he took six stand-up shows to the Edinburgh Festival and in 2011 was awarded the Creative Diversity Award for comedy by a Channel 4-led panel of broadcasters which also included BBC, ITV and Sky.

Chris McCausland has performed all over the world, including across Asia and the Middle East, and regularly travels the UK playing the country's top comedy clubs. He appeared on the BBC's Live at the Apollo in January 2018 and more recently in January 2022 he returned to host the show.

Other notable television appearances over the last few years include Have I Got News for You (BBC One), Would I Lie to You? (BBC One), QI (BBC Two), 8 out of 10 Cats Does Countdown (Channel 4), Hypothetical (Dave), Alan Davies: As yet Untitled (Dave), Celebrity Chase (ITV) Blankety Blank (BBC1), Celebrity Antiques Road Trip (BBC2), Unforgivable (Dave) and Comedians Giving Lectures (Dave) to name but a very few.

He can also regularly be heard on Radio 4, with multiple appearances across shows such as The News Quiz, The Now Show, and Saturday Live.

As an actor his TV credits include Jimmy McGovern's Moving On (BBC One), Eastenders (BBC One), and Me Too! (Cbeebies), as well as writing and fronting a national television advert for Barclays bank, promoting the benefits of their new talking cash machines.

How to book Chris McCausland for your event