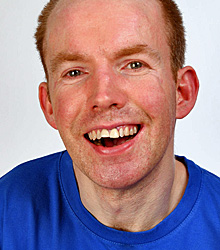 Tech geek, writer and the undisputed hit of Britain’s Got Talent 2018, Lee Ridley AKA Lost Voice Guy, may not be able to talk, but he definitely has something to say, and his comedy will leave you speechless.

He’s gained a reputation for being both very funny and completely unique, and described as “a wonderful comedian” by Little Britain's Matt Lucas and David Walliams commented that he is “one of the best stand up routines I’ve seen — let alone on this show [BGT]”.

Lost Voice Guy won the BBC New Comedy Award 2014, and in the summer of 2018 he won the heart of the entire nation when he was declared the outright winner of Britain's Got Talent. The first comic ever to win the show, when he took to the stage, Lee delivered one of the most hilarious stand-up routines the show has ever seen.

The Newcastle funnyman was diagnosed at the age of six months with a neurological form of cerebral palsy, brought about by a brain infection that left him in a coma for two months. This affected Lee’s movement and rendered him unable to speak. His disability in early life made it difficult to communicate with people, until the age of eight when he received his first communication device.

Upon leaving school Lee studied journalism and online journalism at the University of Central Lancashire, achieving an undergraduate degree for the former, and a Master Degree for the latter. In 2006, he worked as a journalist with the BBC and local newspapers, before taking on the role of online content manager for the city of Sunderland in 2007 where he worked prior to becoming a full time comedian.

Having grown up with a love for comedy and watching stand up comedians, Lee's decision to perform himself came in the aftermath of a Ross Noble show, in which he challenged the comedian on the quality of his Stephen Hawking impersonation, claiming he could do a far better impersonation of the renowned physicist.

To formulate his routines, Lee Ridley purchased an iPad voice synthesiser app called Speak It!, with which he pre-programmed it with sentences based on material he had written.

Following his first performance, Lee adapted his routine by selecting material that had received a favourable audience reaction, and adopting a style of improvisation in which he can create new material onstage through his synthesiser in real-time.

Lee Ridley is the first stand up comedian to use a communication aid. Right from the start of Britain’s Got Talent, which is ITV’s highest rated entertainment show, as Lost Voice Guy he impressed and entertained with his comedy routines, spoken entirely through an iPad app.

Lee has appeared on Live at the Apollo and at the Royal Variety Performance, sold out at the Edinburgh Fringe and embarked on his first nationwide tour in 2019. He is also an ambassador for Scope.

While disability and living with cerebral palsy are central themes to his act, Lost Voice Guy's stand up comedy covers a breadth of wide-ranging topics from roasting the political establishment to the country's welfare system.

Incorporating his character Lost Voice Guy, Lee Ridley has also told jokes / given motivational speeches for a range of charities and other similar organisations including Communication Matters, Find A Voice, the Royal College of Nurses, Percy Hedley School and the Royal College of Speech and Language Therapists.

Lee [AKA Lost Voice Guy] opened our annual event Communication Works in 2016 with a brilliantly funny and engaging presentation. Lee was able to match our brief perfectly, the presentation appeal to the wide range of people attending and was an excellent way to open the day conference. Lee was very reliable and accommodating to our unique requirements and I wouldn't hesitate in recommending Lee to any event because of his versatility and professionalism.

very funny... created a fab atmosphere on the night. Lee was very professional from booking to performing, he had the audience in fits of giggles. Would definitely recommend booking him if you want to have a good laugh.

Finding humour in strange places is one of Lost Voice Guy’s strengths.

Clients often ask about purchasing books for giveaways and delegate packs. Below you’ll find a selection of products by Lee Ridley aka Lost Voice Guy. Click the images to view on Amazon's website. For bulk orders, please speak with your Booking Agent.