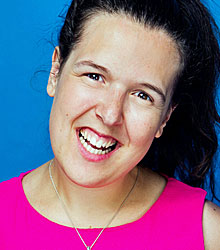 With her infectious laugh and high energy, Rosie Jones has quickly become a must-see act on the comedy circuit.

Born with ataxic cerebral palsy, she started adult life in 2011 as a junior television researcher for Objective Media Group (producers of Derren Brown, Peep Show and The Real Hustle) as part of a Channel 4 disability scheme.

As a comedian, Rosie first performed stand-up without any preparation at a friend's comedy night. Having caught the comedy bug, Rosie continued to perform as an amateur and reached the final of the 2016 Funny Women Awards.

Around the same time, she began writing for The Last Leg during their coverage of the 2016 Summer Olympics. She has also written for Harry Hill's Alien Fun Capsule, Would I Lie to You? and 8 Out of 10 Cats Does Countdown.

Rosie’s disability features heavily in her routines and she incorporates her slow speech pattern into her comedy, constructing jokes to subvert the punch line that audiences expect.

Her debut 2017 Edinburgh Fringe Festival show contained jokes about her visit to the 2016 Summer Paralympics, using disabled toilets, and commentary on the words "disabled" and "spastic". She also talks about a hypothetical “able-bodied Rosie” and discusses a sexual fantasy about Ryan Gosling.

In 2018, Rosie Jones was awarded second place in the Leicester Mercury’s New Comedian Of The Year, and has appeared on 8 Out Of 10 Cats, The Last Leg: The Correspondents and Comedy Central’s Roast Battle (where she whooped Alex Brooker’s ass).

With seemingly no end to her talents, Rosie is also a talented actor and made her prime-time debut in a BBC1 Silent Witness two-part special.

In 2021 Rosie’s debut novel was published. The Amazing Edie Eckhart is a children’s book created to show that no matter how different they are, every child is amazing and deserves to be the hero of their own story.

Loved it! It was a brilliant session and we are really grateful for her sharing her humour and answering some of the deeper questions too. She was a fantastic guest – warm, genuine, thoughtful and funny.

Clients often ask about purchasing books for giveaways and delegate packs. Below you’ll find a selection of products by Rosie Jones. Click the images to view on Amazon's website. For bulk orders, please speak with your Booking Agent.

How to book Rosie Jones for your event