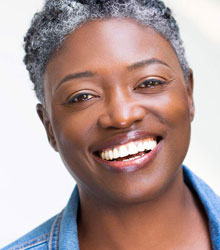 Andi Osho started her career in acting, Andi later turned to Stand-up comedy where she made a big impact in a short space of time by reaching the final of five major new talent competitions and winning the Nivea Funny Women Award in 2007, after only 4 months and just 40 gigs.

Since then, she has gone from strength to strength performing at top comedy venues including The Comedy Store, Jongleurs and The Hackney Empire, as well as appearing on TV Comedy Shows such as Mock The Week, John Bishop’s Only Joking, Stand Up For The Week and Never Mind The Buzzcocks. Andi co-hosted Tonightly with Jason Manford on C4 adding presenting to her talents.

In addition to her TV appearances Andi has performed national tours. At the Edinburgh Festival she has performed two sell-out solo shows, and Andi has also appeared at the O2 Arena in London and Just for Laughs in Montreal.

Andi has written for print, radio, film and TV for broadcasters such as Fox, BBC and Sky. She wrote and starred in Twin Thing made for Sky Arts with Sharon Horgan’s Merman Films and created her own E4 sketch pilot The Andi O Show.

Andi Osho’s debut novel, Asking For A Friend was published with Harper Collins in 2021.

How to book Andi Osho for your event