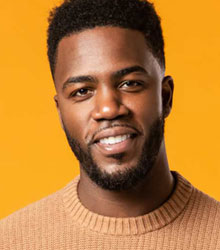 Mo Gilligan’s high-energy style and stunning physicality has led to him being UK’s biggest breakout stars with an online reach running into multiple millions. His debut tour was a great success, selling over 50,000 tickets. It also included a huge two week West End residency, where numerous dates sold out in minutes.

2019 was another successful year for Mo. He recorded The Big Narstie Show Series 2 and his Channel 4 series, The Lateish Show with Mo Gilligan, which hit the Number 1 trend on Twitter, and saw Mo awarded the 2019 BAFTA for Entertainment Performance. Additional credits include: Big Fat Quiz of the Year, Live at The Apollo, The Russell Howard Hour and The Late Late Show with James Corden.

Mo’s debut Netflix Original stand up special Momentum was also globally released in 190 countries and smashed into the UK Top 5.

In 2020, Mo produced and fronted the groundbreaking documentary Mo Gilligan: Black, British and Funny, which aired on Channel 4 and achieved critical acclaim. It also trended at Number 1 on Twitter. Mo’s popularity continued when he joined the judging panel for hit show The Masked Singer on ITV alongside Davina McCall and Jonathan Ross.

His huge There’s Mo To Life 2021 World Tour sold out numerous months in advance and included a very special free show added to his London run for NHS and key workers, which received over half a million hits on his website on the day of release.

Clients often ask about purchasing books for giveaways and delegate packs. Below you’ll find a selection of products by Mo Gilligan. Click the images to view on Amazon's website. For bulk orders, please speak with your Booking Agent.

How to book Mo Gilligan for your event