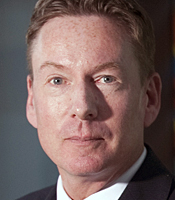 Frank Gardner is an award-winning broadcaster and the BBC’s Security Correspondent, reporting and analysing since 2002 for BBC television, radio and online; covering a wide range of security and terrorism issues both domestically and on the global landscape.

With a degree in Arabic & Islamic Studies from Exeter University, Frank spent 6 years as an officer in the 4th(V) Bn Royal Green Jackets and nine years as an investment banker in New York, London and Bahrain before switching to journalism and joining the BBC in 1995. Frank has reported first-hand on the global 'War on Terror' from almost every Arab country, including Yemen, Afghanistan and Iraq, as well as the Balkans, South America, USA, Guantanamo Bay and the Arctic. In 2004 Frank survived being shot six times at close range by Al-Qaeda terrorists in a Riyadh suburb in Saudia Arabia, despite sustaining major life-changing injuries.

Frank Gardner went on to write the best selling book Blood and Sand, the poignant story of what can happened to your belief system when the culture you have embraced ends up trying to kill you. He was awarded an OBE by HM The Queen in 2005 for services to journalism and has received Honorary Doctorates of Laws from 6 British universities, the McWhirter Award for Bravery, Spain's El Mundo Prize for International Journalism and the UAE's Zayed Medal for Journalism. Frank was also voted Person of the Year by the UK Press Gazette and appointed Distinguished Visiting Professor of 2015 by the University of Southern California. He is a Fellow of the Royal Geographical Society and has given evidence to various UK Parliamentary Select Committees on the conduct of the 'War on Terrorism'.

Frank is a highly respected and sought-after speaker for conferences delivering keynote presentations on his vast areas of expertise and also as an after dinner speaker where a more light-hearted and entertaining presentation is appropriate. He is also an ideal conference moderator and awards host.

A fluent Arabist with a degree in Arabic and Islamic studies from Exeter University, Frank Gardner OBE is a leading expert on Al-Qaeda. Frank's own personal story of survival combined with his extensive knowledge of Middle Eastern history and politics make for a compelling event.

As a career broadcaster and a witty and gifted communicator, Frank shares his passion for the Middle East, travel and adventure. He draws on a unique perspective and understanding of both domestic and international security, notably on Al-Qaeda and Islamic State-related terrorism.

I cannot thank you enough for your inspired talk on Thursday evening. I have lost track of the number of people who said how brilliant you were and, as one person said "if Frank could bottle that positive attitude he could make a fortune. I couldn't agree more.

We were honestly delighted. At the risk of sounding too gushing, it was one of the best presentations I have heard. I am fascinated by the topic so possibly a little biased but I thought the whole thing was well balanced and intellectually stimulating. Excellent. Frank Gardner was relaxed and straight forward in his delivery. He put everyone at their ease very quickly.

Frank Gardner was the perfect chairman for their event and his knowledge of security and terrorism was impressive. I really enjoyed listening to him speak... and his presence made the event.

Clients often ask about purchasing books for giveaways and delegate packs. Below you’ll find a selection of products by Frank Gardner OBE. Click the images to view on Amazon's website. For bulk orders, please speak with your Booking Agent.

How to book Frank Gardner OBE for your event