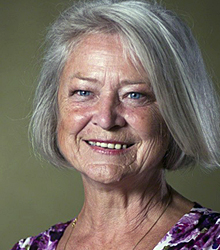 Kate Adie is considered to be among the very finest television reporters. As the BBC's Chief News Correspondent she covered conflicts and major events, and is recognised for her accurate and trustworthy accounts, often delivered from danger zones around the world.

Her big break was the London Iranian Embassy siege in 1980. At that time it represented a breakthrough for women journalists as until that time war zones and other hotspots were the preserve of male journalists. As that afternoon's duty reporter, Kate Adie was first on the scene as the SAS stormed the embassy. The BBC interrupted coverage of the World Snooker Championships and Adie reported live and unscripted to one of the largest news audiences ever whilst crouched behind a car door.

Kate Adie was regularly dispatched to report on disasters and flare-ups throughout the 1980s, including the American bombing of Tripoli in 1986, which proved highly controversial with the Conservative Party Chairman Norman Tebbit, and the Lockerbie bombing of 1988. She was promoted to Chief News Correspondent in 1989 and held the role for fourteen years. One of her first assignments was to report from the Tiananmen Square protests of 1989.

Major assignments followed in the Gulf War, war in the former Yugoslavia, the 1994 Rwandan Genocide and the British evacuation of foreign nationals from Sierra Leone in 2000. In 2003 she withdrew from front-line reporting. Kate Adie currently works as a freelance journalist and after dinner speaker.

She has honorary degrees from six universities, is an Honorary Professor of Journalism at University of Sunderland, and has an Honorary Fellowship at Royal Holloway, University of London. She presents the BBC's long running Radio Four programme, 'From Our Own Correspondent'.

As a hugely popular after-dinner and conference speaker, Kate Adie moves beyond the anecdotal to reveal insights and observations of the fascinating, multi-faceted world of Kate Adie and her lifetime in front-line hardcore journalism.

Kate Adie gave an excellent informal presentation and spent time with our delegates - she did not rush to leave and looked as though she thoroughly enjoyed it.

I wanted to drop you a note to say again: A BIG THANK YOU for joining us at PurpleBeach! Our attendees were truly inspired by you – and your conversation provided a perfect backdrop to close our day on.

Thank you for last night. Kate Adie was fantastic. So very humble. The feedback on her speech has been incredible, especially the fascinating stories she had to share and busting the myth that it's a life of glam was very entertaining. She was super company on our table. Please do pass on our grateful thanks.

Kate was fantastic on the day and a very engaging and interesting speaker. She had clearly put a huge amount of work into her speech and it was greatly enjoyed by everyone there. Thanks for helping with this and we would certainly use you guys again in the future.

Clients often ask about purchasing books for giveaways and delegate packs. Below you’ll find a selection of products by Kate Adie OBE. Click the images to view on Amazon's website. For bulk orders, please speak with your Booking Agent.

How to book Kate Adie OBE for your event