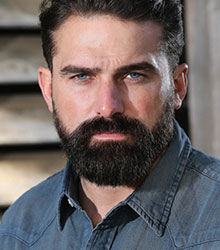 Ant Middleton is best known as the Chief Instructor for Channel 4’s hit show, SAS: Who Dares Wins, a hugely successful series that has also included a Stand Up to Cancer Celebrity Special.

Born in Portsmouth and raised in rural France, Ant set his sights on a career in the armed forces and didn’t stop striving until he achieved his goal. He joined the Special Boat Service (SBS) in 2008 and spent 4 years there. The SBS is the UK’s naval special forces unit and the sister unit of the SAS.

Before SAS: Who Dares Wins, Ant transferred his Special Forces skills to personal security and was selected to protect VIPs, including government officials and high profile celebrities, he also operated as a security expert in South Africa and across various other countries for governments in West Africa.

In early 2018, Ant travelled around the UK on his tour 'An Evening with Ant Middleton'. His book 'First Man In: Leading From The Front' was published by Harper Non Fiction and reached No. 1 on The Sunday Times Best Seller List. Ant also was also filmed climbing Mount Everest, an adventure which tested him further than ever before.

Previously Ant captained a team of men in Channel 4's re-enactment of Captain William Bligh's journey after the infamous 'Mutiny on the Bounty'. He also led teams of engineers as they attempted to build a vehicle in extreme environments,in Channel 4's engineering and survival based show 'Escape'.

Clients often ask about purchasing books for giveaways and delegate packs. Below you’ll find a selection of products by Ant Middleton. Click the images to view on Amazon's website. For bulk orders, please speak with your Booking Agent.

How to book Ant Middleton for your event