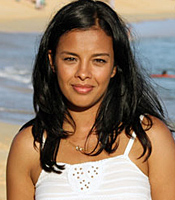 Biochemist and wild animal biologist, Liz Bonnin kick-started her TV career as an entertainment presenter on BBC1's cult TV show Top Of The Pops before returning to her science roots.

Liz had always been interested in biology and chemistry at school, and she went on to study Biochemistry at University and later completed a Masters in Wild Animal Biology and Conservation. Liz's main interests during her studies were animal behaviour and intelligence and big cat conservation. She set up and carried out a research project on the diet of tigers in Bardia National Park, Nepal, which saw her come first in her class.

Liz's TV career has drawn heavily on her academic expertise. In BBC Two’s Horizon Liz presented new scientific research raising hard questions about zoos. She has also filmed a wildlife series for BBC One about animal migrations called Nature’s Epic Journeys, which broadcast in May 2016. Liz presented the hugely successful Big Blue Live series in Monterey, California for the BBC, and for PBS in the USA.

In addition to her TV work, Liz Bonnin is a very busy and popular conference facilitator and awards host, and has presided over various events, including the UK's National Science and Engineering Competition Awards and the Natural History Museum's prestigious Wildlife Photographer of the Year Awards.

The Problem with Plastic with Liz Bonnin
Blue Planet II has had a huge impact in drawing attention to the problem of marine plastic pollution. In her talk Liz reveals the full scale of the problem across our oceans and explores how science can offer solutions to one of the biggest environmental disasters of our time.

Liz Bonnin is a truly dynamic and engaging speaker and we were thrilled to have her close the NI Science Festival. Her keynote talk (The Problem with Plastics) was hugely popular and extremely well received by our audience. The material truly resonated with our audience and Liz did a wonderful job conveying such an important message with the perfect blend of professionalism, intelligence, charm and humour

Clients often ask about purchasing books for giveaways and delegate packs. Below you’ll find a selection of products by Liz Bonnin. Click the images to view on Amazon's website. For bulk orders, please speak with your Booking Agent.

How to book Liz Bonnin for your event