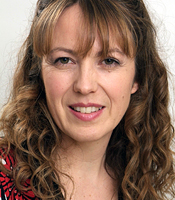 International conference chair, awards host and presenter specialising in science, tech, engineering and maths (STEM), education and gender diversity, Kate Bellingham didn't set out to become a TV presenter. She was 'spotted' whilst working for the BBC as an electronics engineer and invited to audition for a Schools TV programme, 'Techno'.

Embarking on a television career, her engineering background, along with a degree in physics from Oxford University and experience as a computer programmer, came in handy during her four years as a presenter on 'Tomorrow's World', the BBC's flagship science and technology show.

Kate went on to present her own weekly programme on Radio 5 Live, 'The Big Bang' on Children's ITV and other programmes for the Open University, BBC Schools and Channel 5. Subsequent broadcasts included a seven-part science series for the Open University, an engineering series for the BBC2 'Learning Zone', 'Testing Times', a series for Radio 4 about the challenges faced on major engineering projects and a series on maths for BBC Schools Radio. She recently co-presented the BBC2 series ‘The Museum of Life' about the work that goes on behind the scenes at the Natural History Museum in London.

Among Kate Bellingham's other projects has been her recent work as the National STEM Careers Co-ordinator, supporting the Department for Children, Schools and Families' (DCSF) STEM campaign. She is also currently Education Ambassador for the 3 year Bloodhound Engineering Adventure – Richard Noble's latest World Land Speed Record attempt aiming for 1000 mph.

Kate Bellingham regularly hosts conferences and seminars for major companies and is also involved in projects promoting science, engineering and technology to the general public. She is President of Young Engineers, the national network of engineering clubs in schools and colleges, and is a Patron of WISE – Women into Science, Engineering and Construction. She currently sits on the advisory board for the publications arm of the Institute of Electrical Engineers.

In May 2011 Kate was awarded a ‘Women of Outstanding Achievement Award' for Communicating Science, Engineering and Technology to Society by the UKRC. In 1997 she was awarded an Honorary Doctorate in Technology by Staffordshire University in recognition of her work. In 2003 she obtained an MSc in Electronics with distinction at the University of Hertfordshire. Kate was awarded the ‘Public Promotion of Engineering' Medal by the Royal Academy of Engineering in 2004, and between 2006 and 2008 she qualified and worked as a secondary school maths teacher.

In 2012 Kate was delighted to be awarded the Honorary Degree of Doctor of Science by the University of the West of England (UWE) at a ceremony at Bristol Cathedral on 25 July.

Since 2014 Kate has been focusing her huge energy and many talents on her personal goal – to encourage the involvement of girls in Engineering.

Best known for her many years on BBC TV Tomorrow's World, Kate Bellingham has over 25 years experience as a vibrant professional speaker and accomplished host or presenter.

Given Kate’s varied background and portfolio career, a wide range of audiences feel a natural affinity with her when she’s on stage or at the podium. These include school, FE or HE students, teachers and other education professionals, scientists and engineers, careers advisors, HR and recruiters, STEM employers and employees from start-ups to CEOs of multinationals, those promoting gender diversity and, of course, the general public who still remember Kate from Tomorrow’s World.

As a champion for girls' opportunities in engineering, Kate Bellingham is passionate about using her experience from across all STEM subjects to help girls and their influencers make informed subject and career choices. She’s a licensed deliverer of WISE 'People Like Me' and the founder of the School Gate SET online community for parents supporting STEM in primary schools.

Kate Bellingham’s most popular talks include:
– The Gender Agenda in STEM about the challenge of getting more women into STEM and why it matters to us all while also sharing some personal experience of predicting future technologies, and

– STEM – Your World of Opportunities aimed at secondary-school students, and particularly relevant for 11-16 year old girls.

Please pass on our thanks to Kate Bellingham for presenting and hosting last night's CYP Now Awards 2013. She was absolutely wonderful – warm, engaging, enthusiastic and entertaining – and we were so glad to have her involved.

Just wanted to say a huge thanks for coming along last night. I thought it was such a fabulous evening of celebration – and you helped make the children and teachers feel that the event was a 'big deal'.

I just wanted to take the opportunity to thank you once again for your time and your experience this morning. I know that our students really enjoyed hearing from you, and you have certainly inspired a number of them to think again in terms of what is possible... I also know that the small group of girls thoroughly enjoyed the chance to work with you later in the morning. Thank you again for your passion and your generosity in sharing your experience.

The BAE Systems event was a great success and Kate Bellingham's presence, professionalism and terrific input really added to that.

Just a short note of thanks for last week, you were brilliant for the event – and the feedback has been immensely positive.

How to book Kate Bellingham for your event