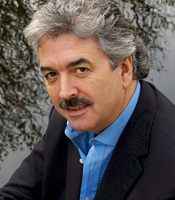 Dominic O'Brien is the eight-time winner of the World Memory Championships. Since he began developing his memory, Dominic has gained many prestigious titles and has won many entries in The Guinness Book of Records.

He was named 'Brain of the Year 1994' and was awarded the title 'Grand Master of Memory' by the Brain Trust of Great Britain in October 1995 - presented to him by Prince Philipp of Liechtenstein.

Some of the programs he has appeared on are 'How Do They Do That?', 'Oprah', 'You Bet', 'Guinness World of Records', 'Magic & Mystery', 'Tomorrow's World', 'Are You Superhuman?' and 'Record Breakers' to name but a few.

In 1995 Dominic was the subject of ITV's 'Network First's Fear' and 'Counting Las Vegas'. Dominic set a new world record in August 2000 at the WMC by memorising perfectly a random sequence of 316 numbers in just 5 minutes. That's faster than 1 digit per second. He is the inventor of the Dominic System, a powerful technique to rapidly access the power of memory.

He has memorised a huge variety of information including: all the FA Cup final results (with scorers, attendance, venue and referee). Every Number One hit since 1952 (with not only artist but date and the number of weeks at the top). All trivial pursuit questions and answers.

An evening with Dominic O'Brien is a unique experience and can be tailor-made to client's needs including the pre-memorisation of many facts and figures about the company or indeed the people attending i.e. wives names, how many children they have, nicknames, bad habits, etc...

In spite of his incredible achievements, Dominic is not some grey suited boffin, but is in fact a lively, entertaining and humorous speaker.

A formidable demonstration of what a working memory can be made to achieve. We were left open-mouthed at what you were able to do with the minimum of on-the-spot preparation.

The Institute For Cultural Research.

We have had so many people saying how much they enjoyed the memory item and I know Ant was thrilled to have had such a great trainer.

It was worth coming to the conference just to see Dominic O'Brien's incredible performance.

The guest speaker, Dominic O'Brien, was very well received and he did a fantastic job reaching to different people from different backgrounds.

Dominic O'Brien was very entertaining. It was amusing watching people watch him as he mingled silently before the dinner, obviously remembering faces. He was humorous and polite and all the reports I have had from guests suggest that he was very well received.

Clients often ask about purchasing books for giveaways and delegate packs. Below you’ll find a selection of products by Dominic O'Brien. Click the images to view on Amazon's website. For bulk orders, please speak with your Booking Agent.

How to book Dominic O'Brien for your event