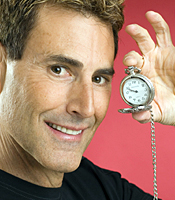 Uri Geller is one of the world’s most investigated and celebrated mystifiers. Famous around the globe for his mind-bending abilities, the best-known of which is for spoons to curl up right at his fingertips and before your very eyes, he has led a unique life shrouded in debate, controversy and mystery.

Born in Israel, December 1946, Uri’s parents were of Hungarian and Austrian descent, and he is distantly related on his mother’s side to Sigmund Freud. At the age of four he had a mysterious encounter with a sphere of light while in a garden near his house. A retired Israeli air force officer, who was an eyewitness to this encounter, validated this mystifying event decades later.

Uri first became aware of his unusual powers when he was five years old. One day, during a meal, his spoon curled up in his hand and broke, although he had applied no physical pressure to it. His parents were somewhat shocked and Uri did not mention the incident to anyone else at that time. He developed these powers in school by demonstrating them to pupils. His mother thought he inherited them from Sigmund Freud.

When he was eleven, Uri went to live in Cyprus, where he remained until he was seventeen. He then returned to Israel, served as a paratrooper in the Israeli army and fought in the Six-Day War of 1967 during which he was wounded in action. From 1968 to 1969 Uri worked as a model, being photographed for many different ad campaigns.

In 1969, Uri Geller began to demonstrate his powers of telepathy and psychokinesis to small audiences. By the end of 1971, he was a household name throughout Israel, thanks to his numerous stage appearances. He was given a huge boost by the then Prime Minister, Golda Meir when asked on a national radio programme what she predicted for the future of Israel, she replied, “Don’t ask me – ask Uri Geller!”

Uri has been studied by the world’s leading scientists, including a few who worked with Albert Einstein. He has lectured to the directors and CEOs of large multinational companies such as Henkel, the Prime Minister’s Conference, Novartis, Mizuno, Sony, Rolls Royce, Hallmark and many more.

He was also invited by PriceWaterhouseCoopers as a speaker to the World Economic Forum at Davos, Switzerland, along with such dignitaries as Bill Clinton, Dick Cheney and Steve Forbes. Uri has also lectured to the heads of Reuters in Jerusalem and also to the heads of Google Europe.

Uri Geller’s artistic skills began during his early childhood. A ‘pupil’ of Salvador Dali, whom he knew well, Uri has exhibited his drawings, paintings and artworks in major galleries and museums in the USA, Europe, Japan and Israel. His drawings are featured on both Belinda Carlisle’s and Michael Jackson’s albums, and he helped to design the logo of the most successful boy band in the world ever, N*SYNC.

Although he is not a Magician, Uri Geller was very proud to accept the David Berglas International Magic Award in London in 2008, for his services to the promotion of Magic. In 2015, Uri received The Wizard Trophy, for his contribution to the magic world. In 2012 Uri also received the Star Foundation award at the House of Commons (UK Parliament) in London, in recognition of his charity work.

In 2017, the CIA released a large volume of previously top secret data, including documents and memos about the tests that were performed on Uri Geller. The CIA concluded that Uri “demonstrated his paranormal perception ability in a convincing and unambiguous manner’.

Uri’s lectures are packed with motivational, inspirational, empowering and compelling ‘infotainment’, which leave the audience amazed, mesmerised, motivated, enthusiastic, revitalised and with a much improved positive mental attitude, state of mind & self-belief.

Some of the things audiences have the opportunity to discover:
• The power of positive thinking & how to become a positive thinker,including interactive demonstrations with audience members.
• How to discard limiting beliefs & develop new empowering unshakable self-belief & self-confidence.
• The benefits of peace of mind, and how to achieve it.
• How to develop mental & physical stamina & endurance.
• How to become more successful in business, finances & relationships.
• Jaw dropping demonstrations of what made Uri Geller famous.
• The importance of health, and how to think & become more healthy.
• How to apply the universal law of attraction.
• How to stop smoking NOW! Including a demonstration on stage that this really does work, and any smokers who wish to, have the opportunity to leave the lecture as non-smokers!
• Einstein’s theories of relativity & how to apply them to your everyday life to become a more positive & successful person in all aspects of life.
• Techniques of visualisation, affirmation & contemplation.

Uri Geller has lectured to a wide variety of audiences in many countries, from a group of US senators and national security executives in the high-security room in the Capitol in Washington DC, to the United Nations. Uri has also lectured and conducted seminars to PriceWaterhouseCoopers, the directors of Hallmark, the Royal Geographical Society, Rolls-Royce, Institute of Incorporated Engineers, T Mobile, Moto, Mizuno, Sony, Omron, Novartis, Mensa, Google, Henkel and the Prime Minister’s Conference.

He has been a guest speaker at the Oxford and Cambridge unions, Yale, Berkeley and Stanford universities, and at the World Economic Forum 2004 in Davos, Switzerland along with dignitaries such as President Bill Clinton, Vice President Dick Cheney, and Steve Forbes.

After Dinner Speaking & Entertainment
Spoon-bending maestro Uri Geller will treat your guests to the most mind-boggling, unique and extravagant evening they’ve experienced. With fun stories of his life, past experiences and knowledge, Uri can bend and blend the right words to create a new world within the old. There is no stopping him when he takes the stage, surpassing the expectations of everyone.

A toast to his guests or a word of appreciation to his hosts. Uri Geller is also classy and fantastic presenter and can speak at wide range of occasions and events. Be it an evening for fund raising, a corporate client evening or a light-hearted get together Uri will delight his audience while inspiring and motivating them. His approach to each audience is tailored differently and has a superb past record of enthralling all his listeners.

Uri Geller is the perfect after dinner speaker. Book him now to charm your audience and fill their evening with fun, laughter and delight. Whatever your needs, Uri Geller will amaze and inspire. Oh and yes, he will bend spoons if you have the caterer's permission!

My personal judgement as a PhD physicist is that Uri Geller demonstrated genuine psychoenergetic ability at Birkbeck which is beyond the doubt of any reasonable man, under relatively well-controlled and repeated experimental conditions.

Most of us were sceptics and cynics, but Uri Geller won us over. His lecture was so motivating and inspiring that all of us were buzzing with positive energy. The content of his talk was extremely thought provoking. We highly recommend him.

In all the years I have known Uri - and we first met in the early 1970's - I have been fascinated by his astonishing powers and the way they have excited the imagination of people the world over. Recently we worked together on television again and I was thrilled by the way a whole new generation of viewers responded to Uri's extraordinary psychic talents.

Uri Geller has bent my ring in the palm of my hand without ever touching it. Personally, I have no scientific explanation for the phenomena.

Clients often ask about purchasing books for giveaways and delegate packs. Below you’ll find a selection of products by Uri Geller. Click the images to view on Amazon's website. For bulk orders, please speak with your Booking Agent.

How to book Uri Geller for your event