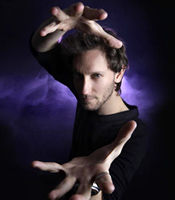 Lior Suchard became a celebrated performer when he was elected unanimously as the first successor of Uri Geller in the highly rated TV program “The next Uri Geller”.

Do you believe someone can read your mind? Lior Suchard can. He can delve into your innermost thoughts, and know what you are going to say even before you do. His outstanding performances of mind reading, thought influencing, predicting and telekinesis have earned him international acclaim as a top class supernatural entertainer and mentalist from members of the public, to the best- performing CEOs worldwide and Hollywood celebrities.

Lior Suchard first created a storm when he was selected as the winner of highly rated international TV show 'The Successor' to officially take over the celebrated mystifier, Uri Geller. Since then, he has performed with enormous success in 42 countries around the world, regularly appears on prime time TV. His live performance on the Tonight show floored both Jay Leno and guest, Zac Efron and his popularity got him voted best mentalist in the world on German TV show, Pro 7.

Adding to Lior's talent as a mentalist, is his natural ability for creating an all-round entertaining performance. Throughout his live show, 'Supernatural Entertainment', Lior relies on full audience participation to perform supernatural feats far beyond telepathy and mind reading.

He uses members of the audience to perform his acts, interacts with them and elates their senses by taking them on a exciting adventure built on drama, tension and astonishment doused with a huge sprinkling of humour, comedy and fun.

I don't understand why Israel lets you leave. They should ask you to sit on the Iranian Boarder and do your thing over there.

Unbelievable! I can't believe he guessed the name of Zac Efron's first love. What a great guest to have on the show.

Both of us know how to be funny and entertaining. It's a pity I cannot read thoughts too.

He's such a crowd-magnet and people will still talk about him for days after seeing him perform.

It's the most amazing thing I saw in my life. And I've seen a lot!

He was incredible and he knows what's good for business.

Everyone should have 'The Suchard experience'. I've never seen anything like it.

How to book Lior Suchard for your event