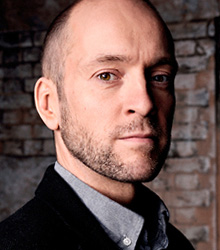 Derren Brown has become one of the country’s best known performers and made himself one of the most - if not the most - extraordinary and impressive performers living today; as much admired for his unique talents as vilified for his more controversial stunts.

He has been compared to a Jedi and dubbed the scariest man in Britain; there have been calls for him to be banned and to be burnt at the stake. Derren spent three years designing an immersive ghost train at Thorpe Park that blends 4D, grand illusion, live action and special effects. To date, it is the most expensive and ambitious attraction the Park has ever offered.

Derren began his UK television career in December 2000 with a series of Channel 4 specials called Mind Control, which won The Silver Rose in the Variety Category at Rose d’Or Montreux 2003. Since redefining the genre of magic for intelligent, modern audiences, he has become synonymous with the art of psychological manipulation. His TV shows have become must-see events.

Amongst a varied and notorious career, Derren Brown has played Russian Roulette on live television, convinced middle-managers to commit an armed robbery in the street, led the nation in a seance, stuck viewers to their sofas, successfully predicted the National Lottery, motivated a shy man to land a packed passenger plane at 30,000 feet, exposed psychic and faith-healing charlatans, and hypnotised a man to assassinate Stephen Fry.

Since 2005, he has toured with eight sell-out one-man stage shows. The shows have garnered a record-breaking five Olivier Award nominations for Best Entertainment, and won twice. This means Derren has had the largest number of nominations and wins for one-person shows in the history of the Awards.

His 2017 US debut show SECRET won the New York Drama Desk Award for Unique Theatrical Experience and returned for a sell-out run on Broadway in 2019.

Derren was born in London and privately educated at Whitgift School in South Croydon. He then studied law and German at Bristol University where he witnessed a hypnosis show by Martin Taylor. This was the stimulus that inspired him to choose a career as a magician hypnotist.

During his undergraduate years, Derren Brown began to give stage shows at the university, and performed close up magic at local bars and restaurants. He also became a prolific writer on all things magical and it wasn’t long before Derren came to the attention of TV executives who launched his first show, Mind Control in 2000. It was an instant success.

Derren Brown revolutionised the art of mentalism and removed it from a traditional format to a whole new concept of exciting and popular entertainment. Derren openly confirms that he does not possess any supernatural or magical powers, and his performances often expose the methods of those that do, such as faith healers and psychic mediums.

He makes it very clear that his performances are simply demonstrations using psychology, intuition, hypnosis, interpretation of body language and the power of suggestion. He also utilises the magicians traditional tools of misdirection, sleight of hand, cold reading and showmanship.

Derren Brown lives a relatively quiet existence, loves classical music, and reads extensively about philosophy, existentialism, psychology, and kindred subjects. He has developed a love of painting with a number of his hauntingly beautiful portraits hanging in galleries. He also has a unique collection of curios and taxidermy.

Derren Brown continues to stimulate the senses and make a mark in the history of magic, not with the usual brightly coloured stage props and sawing-in-half illusions, but with acts that challenge his audience’s intelligence and ability to comprehend the ingenious effects he creates using just his mind.

Derren Brown is at his very best on stage. His one-man shows have received wide critical acclaim and more Olivier wins and nominations than any other in history.

His after dinner performance for corporate and private events is 40-45 minutes of mind reading and psychological illusions — with lots of audience participation, wit and sharp humour.

He begins by asking the whole audience to stand and, working with them as a group, he whittles them down through a psychological game to the least malleable of the group. Derren then chooses his volunteers on an individual basis and will always check first with the client to ensure he only selects guests that would be willing participants.

The first volunteer he chooses forms the framework of the show, as he or she gambles light-heartedly in a game of wits with Derren throughout the act and tries to win a sizeable chunk of money. Volunteers are invited onto his stage to experience his 'mind-reading' and a series of stunning games and displays. He does not hypnotise them, yet the show is a jaw-dropping display of influence and unconscious control - a sort of psychological magic show.

The finish is a high-energy and hugely surprising finale using a random guest from the back of the room. The precise content of the show will vary from show to show, depending on Derren's volunteers, but he is charming, funny and respectful; as well as being a highly talented performer who ensures the audience are left amazed and with lots to eagerly talk about.

Many thanks for liaising with Derren and helping to sort out yesterday evening’s event. I am reliably informed that everyone was “blown away”, and have heard words bandied about like “amazing”, “fantastic”, “unbelievable”. All in all, a great success.

We loved Derren – such a great end to the event and it was brilliant to see our exec team who were sitting on the back row enjoying his session so much!

Clients often ask about purchasing books for giveaways and delegate packs. Below you’ll find a selection of products by Derren Brown. Click the images to view on Amazon's website. For bulk orders, please speak with your Booking Agent.

How to book Derren Brown for your event