After Dinner SpeakersHealth and Wellbeing 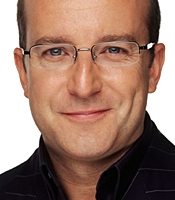 After Dinner SpeakersHealth and Wellbeing

Paul McKenna is the world's most successful hypnotist. His incredibly popular stage show plays at venues usually reserved for rock concerts and he broke all records when he put on the largest show of stage hypnosis in the world by selling out The Royal Albert Hall. Paul is credited with giving the hypnotic show a whole new image, combining the intrigue of the scientific with the glamour of the mysterious. As a form of entertainment Paul's show is hard to beat and apart from being hysterically funny, it's also an education. In 1994 Paul won the award for 'best London Show' as well as the prestigious T.R.I.C. Award for Best Newcomer.

Since Paul left college at 18, he has worked mainly as a Radio Broadcaster. He eventually gave up his job at Radio One to follow his career as a hypnotist full time. Paul's interest in hypnosis stems from a study of Eastern religion and Psychology.

Paul McKenna's Television series 'The Hypnotic World Of Paul McKenna' proved a huge success for ITV with over twelve million viewers. His TV series is now shown in over 42 countries around the world with over 200 million viewers. Paul also devised and presented a series on the Paranormal for Carlton TV. As well as his television projects, Paul has written two books which spent weeks on the best-seller list and have been translated into several languages. He also spends a lot of his time working individually with private clients. He has helped the police and worked with a number of Olympic athletes with astounding results

Paul has now the largest hypnosis training company in the world, teaching thousands of people every year how to use self-hypnosis for life enhancement and works extensively in the corporate sector training in the realms of influence, stress control and personal power among others.

Paul McKenna now spends most of his time in the United States where he was recently given his own prime time special by ABC TV entitled 'The World's Funniest Hypnotist', as well as appearing on Montel, Howard Stern, Good Morning America, Entertainment Tonight, MTV, Prime Time Live and many many more. He has also completed a sell-out run of his live stage show on Broadway, which received rave reviews and an award nomination. His show was attended by stars such as Leonardo Di-Caprio, Liz Hurley, Hugh Grant, Harry Bealafonte, Chritina Ricci and Alice Cooper.

Clients often ask about purchasing books for giveaways and delegate packs. Below you’ll find a selection of products by Paul McKenna. Click the images to view on Amazon's website. For bulk orders, please speak with your Booking Agent.

How to book Paul McKenna for your event