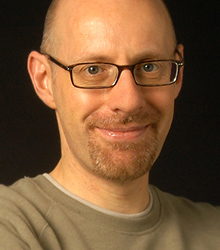 Professor Richard Wiseman started his working life as an award-winning professional magician, and was one of the youngest members of The Magic Circle. He then obtained a first class honours degree in psychology from University College London and a doctorate from the University of Edinburgh.

Since then Richard has been based at the University of Hertfordshire in the UK, where he currently holds Britain's first Professorship in the Public Understanding of Psychology.

Professor Wiseman has established an international reputation for research into unusual areas of psychology, including luck, deception, the paranormal, humour, and the science of self-help. He has published over 60 papers in refereed academic journals, including articles in some of the world's most respected science publications.

He frequently gives keynote speeches in Britain and abroad, and has recently presented at The Royal Society, Microsoft, Caltech, and Google. Professor Wiseman's research has also featured in a large number of television programmes, including Horizon (BBC), Body Shock (Channel 4), 20/20 (ABC), and Dateline (NBC).

He is often heard on BBC Radio 4, with regular appearances on Start The Week, Midweek and The Today Programme. Feature articles about his research have been published in The Times, The Daily Telegraph and The Guardian, and his work made the front cover of The New Yorker magazine. A recent poll revealed that he was the psychologist most frequently quoted in the British media.

Professor Richard Wiseman has written three best selling books that have been translated into over thirty languages. The Luck Factor presents a comprehensive account of his research into the psychology of luck. Quirkology examines the curious psychology of everyday life, including laughter, lying, and love. 59 Seconds investigates the science of self-help and rapid change. His latest book, Paranormality, was published in 2011.

Over 2 million people have taken part in Richard Wiseman's mass participation experiments, and his YouTube channel has received over 11 million views. He has created several viral videos, including the world famous 'Colour Changing Card Trick'.

Professor Richard Wiseman regularly acts as a consultant, with recent projects including working for Channel 4's 'Derren Brown Investigates', helping to create the MythBusters' giant Mexican wave experiment during Jon Stewart's mass rally in Washington, creating viral videos for CBS's 'The Mentalist', and providing ideas and inspiration for the West End play 'Ghost Stories'. He has received various awards for his work, including The CSICOP Public Education In Science Award, the Joseph Lister Award For Social Science, and the prestigious Perrott Warrick Scholarship from Trinity College Cambridge.

Richard Wiseman is the most followed psychologist on Twitter, and was recently listed in the Independent On Sunday's top 100 people who make Britain a better place to live.

Professor Wiseman also researches the psychology of lying and deception. He has spoken at several prestigious business conferences, and provided training in the detection of deception in many organisations, including city banks, law firms and fraud investigators.

With his magical blend of humour and charisma Professor Wiseman provides a lively and high entertaining session.

The Luck Factor (Prof. Wisemans’ most popular corporate talk)
Why do some people lead happy successful lives whilst others face repeated failure and sadness? Why are some people always in the right place at the right time, while others are always unlucky? For many years psychologist Professor Richard Wiseman has worked with some of the world’s luckiest and unluckiest people to answer these fascinating questions. Discover the results of his work and find out how ‘The Luck Factor’ can change your life.

The Psychology of Lying and Deception
Why do some people lie and deceive, whilst others are honest and reliable? Is it possible to employ technology to help catch a liar? Why are most people very poor lie detectors, and can anything be done to improve their skills? In this interactive talk, Professor Richard Wiseman presents an accessible and informative insight into the psychology of deceit, and how science can help distinguish truth from fiction.

Mind Magic
Magicians appear to make solid objects vanish into thin air, defy the laws of gravity and predict the future. Magician and psychologist Professor Richard Wiseman invites you to step backstage and discover the secret science of sorcery. Learn the hitherto hidden psychology employed by some of the world’s greatest illusionists, discover why the hand is rarely quicker than the eye.

LaughLab
In 2002, psychologist Professor Richard Wiseman travelled the world on a year-long search for the world’s funniest joke. In this entertaining but informative talk he explains how the resulting research revealed much about the science of humour, including why some jokes make men laugh and women groan, the best time of day to tell a joke, how our sense of humour changes throughout our lives and, of course…the world’s funniest joke.

Our team loved the “colour changing card trick” and enjoyed discovering how many changes they had missed because they were so focused on the cards changing, rather than the whole picture. It provides an excellent demonstration of how often we focus on a challenge and overlook the opportunities that are right before our eyes.

Just a note to let you know that Professor Richard Wiseman was brilliant. A great show. I thought he was absolutely hilarious, and have received very positive feedback from my colleagues. I will certainly recommend him in my network of Comms professionals. Please pass on my thanks!

Professor Richard Wiseman was a sensation! Showmanship at its best! As a keynote speaker at our event (Life Underwriting Claims and Insurance Doctors) he delivered a  unique presentation combining magic, psychology and comedy that not only connected with our audience but entertained them along the way!

Clients often ask about purchasing books for giveaways and delegate packs. Below you’ll find a selection of products by Professor Richard Wiseman. Click the images to view on Amazon's website. For bulk orders, please speak with your Booking Agent.

How to book Professor Richard Wiseman for your event

To book Professor Richard Wiseman, please submit an online enquiry, email bookings@nmp.co.uk or speak with one of our booking agents on +44 (0)1372 361 004.