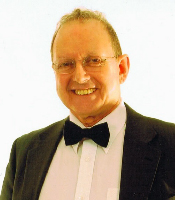 Malcolm Milton is one of the most charismatic, baffling and unique performers working in Britain - if not the world - today. Tailor-making every single performance to fit the client's specific requirements, Malcolm is known as The Memory Man, and presents an astounding act of classic mind power whereby he is able to memorise and recall the names of every single guest in the room.

Not only that, but he will also recall specific facts about each of those guests, leading the astounded audience wondering when and where they had previously met him.

Of course they haven't. As one of the world's foremost after-dinner speakers and entertainers, Malcolm Milton pioneered the idea of The Undercover Party Guest. He has genuinely never met any of the guests prior to his appearance and is a complete surprise to everybody... masquerading as a visiting CEO, senior government dignitary, guest speaker or a long-lost relative, Malcolm mingles incognito until the moment is right for him to announce himself to the guests.

The demand for his unique brand of memory power, magic and infectious comedy - along with his charismatic personality – has spread far and wide, building Malcolm a reputation as a brilliant, not-to-be-missed performer.

Malcolm Milton's diligence and attention to detail for the specific requirements of clients has led to him having been flown to places as diverse as Shanghai, Sydney, the Seychelles, Washington DC, Dublin, Paris, Tokyo, Hong Kong, Amsterdam – and to functions, parties and conferences throughout Spain, Portugal, Germany, Norway, Canada, New Zealand, Australia and many other high-level corporate and private events throughout the world.

Malcolm Milton's background is as a long-time member of The Magic Circle, where he honed his skills performing at functions both large and small, private and corporate, knowing exactly how and when to use his blend of skills and artistry to create the best performance on the evening.

Whether playing it straight in seminars, or ensuring an event finishes on a high, Malcolm has proven himself to be the perfect tool for corporate functions both large and small. Each performance is carefully crafted and put together in discussion with the client, to ensure maximum entertainment and enjoyment is released.

Whether it is a large multinational corporate gala or an intimate dinner with your friends, Malcolm Milton takes the same pride, enjoyment and attention to detail, being instantly adaptable to any situation.

The Big Speech aka The VIP Guest Speaker – special guests and grand disguises – Malcolm Milton's ability to remain in as serious a character as a US Senator, or even a visiting (foreign) CEO, waiting for the final moment to blow the audience away with an hilarious, specially-written “speech” which soon evolves into a quick-shooting name-drop and one-liners that leaves the audience in stitches.

The Stranger aka Mindpower Memory – the classic “Memory Act” - the unique and internationally renowned performance that has wowed audiences all over the world, capturing their imagination with a real and totally original “how did he do that?” moment in people’s lives.

The Awards Dinner – Special Awards and Lifetime Achievements. A fantastic after-dinner, end-of-conference centre piece that will leave delegates or guests smiling, building an evening’s entertainment out of the awarding humorous prizes and special lifetime achievement/best/most/ employee type awards – great for team building and creating an esprit de corps among staff and regional departments.

I would like to thank you very much for turning our bubble party into a magical feast. Your performance was simply outstanding. The effect that you have on people is just amazing and I am sure that everyone of them will remember that time spent in your company as unforgettable.

Your act was funny, clean and extremely clever. Delegates are still talking about it and probably will do for a long time!

Wow! Thank you so much for entertaining us all last night. I can honestly say you stole the show. Everyone was enormously impressed and amused and both since the evening and during, people kept commenting what a great idea it was to have you there. It simply couldn't have worked out better.

May I take this opportunity to thank you for an excellent and highly motivational 'training' sessions. The team had a great day, with your act being the icing on the cake.

Rarely am I at a loss for words, but how can I thank you properly for your performance. The evening was turned from excellent to outstanding in about 20 seconds. As you saw, everybody thoroughly enjoyed the entertainment you provided and loved being personally involved.

What can I say? Your performance was superb and was enjoyed by everyone who attended the lunch. It is a pleasure to deal with someone who is so professional and obviously enjoys what he does. Excellent.

How to book Malcolm Milton for your event